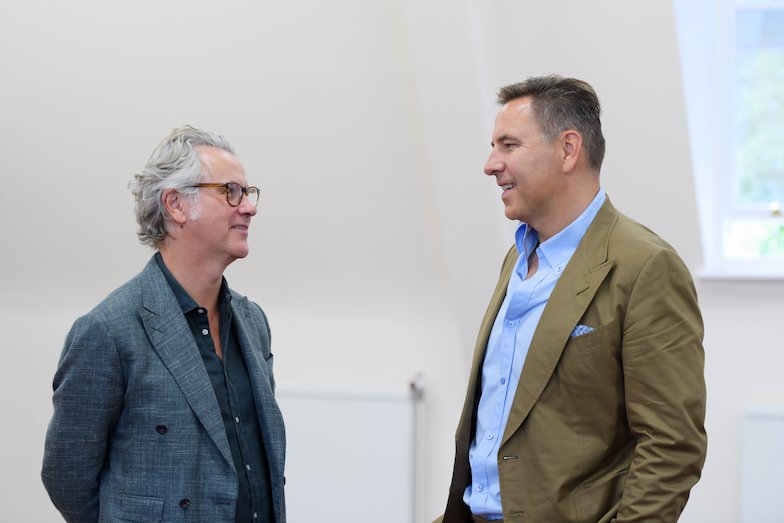 Guy Chambers says he “jumped at the chance” to write songs for The Boy in the Dress, the Royal Shakespeare Company’s musical adaptation of David Walliams’ popular children’s book.

Chambers, best known for co-writing the majority of Robbie Williams’ biggest hits, as well as pop gems for Kylie Minogue, Beverley Knight and Melanie C, had been wanting to work on a musical for a while. “I love the RSC and what they do – I love [their musical production of] Matilda, which I’ve seen six times, and I also love David’s book, so it was a very powerful proposition,” he says.

Chambers, who co-wrote every song for the musical with Williams, his most frequent collaborator, says he felt able to relate to Dennis, its lead character. A 12-year-old boy who badly misses his mother following his parents’ divorce, Dennis finds comfort in Vogue magazine and wearing clothes that have traditionally been intended for girls; he even creates an alter-ego named Denise, an exotic French exchange student.

“Like Dennis, I didn’t have an easy time at school,” Chambers says. “I was bullied – I went to a pretty hardcore comprehensive in greater London and I kind of hated school until I was 13, when I moved to a different school in Liverpool.” Chambers says he “never did anything as radical as wearing a dress to school”, but did have his own “little protests” along the way. “Once I wore pyjamas to school because they made the start time earlier,” he recalls, “which felt pretty rebellious at the time”.

Chambers, Williams and Chris Heath, who contributed to the lyrics, wrote the musical’s songs by strictly following its book by gay playwright Mark Ravenhill, a former RSC writer-in-residence and the author of acclaimed queer-themed plays including Shopping and Fucking and Mother Clap’s Molly House. “Rob and I have often written to briefs over the years, so that element of it wasn’t difficult for us,” he says. “We’ve sometimes set ourselves briefs – we did that with [Williams’ number one hit] Millennium, for example, when we both decided we wanted to write a song called Millennium, basically, to get loads of radio airplay prior to the turn of the millennium.”

Chambers says the musical features songs which channel Dennis’s pain, as well as some “really great uptempo numbers” including a “big disco song” which soundtracks a pivotal moment. “There’s a scene where Dennis goes to [his friend] Lisa-Jane’s house for the first time,” he explains. “Dennis already has a love of Vogue magazine and fashion, but then Lisa-Jane persuades him to try on a dress for the first time. We thought a disco song would work well there because we could just imagine the staging – Dennis putting on the dress, a big disco ball coming down, and then this big dance routine. It’s a really fun fantasy sequence, really, and that’s exactly how it turned out.”

Of course, Chambers and Williams have co-written a big disco song before: Kylie’s Your Disco Needs You, a gloriously camp, Village People-inspired romp from her Light Years album. It became a highlight of her triumphant Brighton Pride set this summer. Chambers says he’s well aware the song has become a fan favourite and a modern queer classic; and he loved it when Kylie sent him a a video of her singing it with Katharine Jenkins at the Royal Albert Hall a few years ago. “I’m very proud of the song,” he says. “The only thing that’s laced with some mixed emotions is that Miles Leonard, who was the head of Kylie’s label at the time, stopped it being a single in the UK. That was painful, it really was, because it should have been a single in the UK and it would have done really well.”

Is it true the single’s UK release was vetoed because it was considered “too gay” and “too camp”? “Absolutely – that’s what we were told, yeah,” Chambers replies. “As if that’s ever been something to stop a song from being commercial. There’s always been room for camp songs – it’s something we need; that part of our culture is very important.”

In a way, I suggest, the fact that Your Disco Needs You never became a single only adds to its cult and queer appeal: walk into any bar on Manchester’s Canal Street or London’s Old Compton Street and you’re almost guaranteed to hear it. “That’s made my day to hear that,” he says, sounding genuinely touched. “I’m very grateful to the fans for keeping the song alive over all these years, it’s wonderful.” He also teases the possibility of Robbie Williams recording his own version of Your Disco Needs You, saying: “I think he will do that at some point, and I think he should.”

He and Williams began writing together 22 years ago when the singer was working on his debut album, Life Thru a Lens. They had a break from one another in the mid-noughties, but have since renewed their super-fruitful partnership. Think of a Robbie song – Millennium, Let Me Entertain You, Angels, Rock DJ – and it’s probably one that he and Chambers wrote together. Chambers says the secret to their success is that they’re opposites who complement one another creatively. “Rob’s currently playing golf all the time – that’s his new thing,” he says, “whereas for me, the idea of playing golf is complete anathema. I cannot think of anything more boring! And he loves football, whereas I can’t abide it.” But when they get in a recording studio together, Chambers says they’re very evenly matched. “I think Rob respects my knowledge of pop music and my originality, and I really respect his melodic and lyrical gifts.”

At this point in his career, which has seen him win three Brit Awards and three Ivor Novello songwriting prizes, Chambers says his dream writing partner is Lana Del Rey. “I actually had a couple of days writing with her just before she did Video Games,” he says regretfully. “But unfortunately, it was me, Lana and another songwriter, and I didn’t really click with this other guy. So I’d like to try writing with her again – ideally, just with her this time.” What about del Rey does he admire? “I really love the fact that she has a vision for herself. She’s like an old-school movie star to me – I love the whole world she’s created for herself; it’s very inspiring.”

But for now, Chambers is focused on perfecting his songs for The Boy in the Dress ahead of the musical’s November debut. “The choreographer is asking for changes and the director is asking for changes, so we’re trying to make them while holding on to what made the songs great in the first place,” he says. “Sometimes the changes are for the better – sometimes it’s like, ‘Thank God we did that!’ At other times, the changes maybe make the song sound a little clunky to me, so I have to think: ‘Can I stand that?’ But this process really is a true collaboration; that’s the nature of working on a big musical.”

The Boy in the Dress runs in the Royal Shakespeare Theatre, Stratford-upon-Avon between 8 November 2019 – 8 March 2020. Tickets: rsc.org.uk.

The post Your Disco Needs You was ‘too gay and camp’ for a Kylie UK single release, reveals writer appeared first on Gay Times.