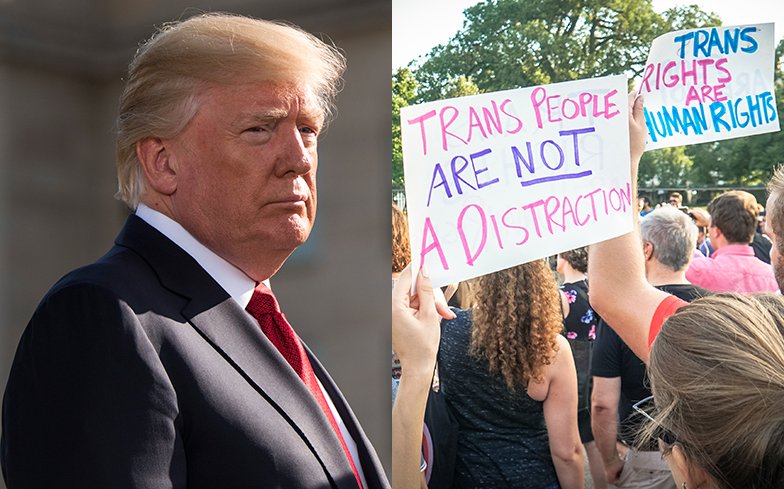 Tr*mp’s ban on transgender people serving in the military went into effect in April.

The President of the United States first took to Twitter in 2017 to announce that anyone who identifies as trans will no longer be allowed to serve their country, citing “tremendous medical costs” and “disruption” by trans individuals.

Tr*mp has claimed that the policy has support, but many, including those in the military have spoken out against it. In January, retired US general Stanley McChrystal said: “If we have people who want to serve, if they have the desire and capacity to serve, I think it’s a mistake to lose that talent.

The ban went into effect in April, however, it has faced roadblocks with the House of Representatives first blocking funding for the ban, before passing an amendment that sought to reverse the ban.

Executive director of the National Center for Transgender Equality, Mara Keisling, said in a statement: “This is a crucial moment for our elected officials to bring accountability to a reckless and lawless policy.

“This bigoted ban has brought chaos to prospective recruits, active duty service members, and countless families forced to watch their dedication and duty soiled by a self-interested President.”

And now the ban faces legal challenges, as Stars and Stripes reported earlier this week, that a judge in Maryland has ruled that transgender troops will be allowed to sue the Pentagon for discrimination.

Although five out of the six people who brought the case to the courts were barred from bringing their cases further, due to them continuing to serve, the judge allowed the other case to proceed.

In his ruling, District Judge George Russell, said: “By its plain language, then, the [transgender policy] discriminates on the basis of transgender status.

“In addition the … plan categorically bars transgender individuals who have transitioned to their preferred gender — a recommended treatment to alleviate the distress dysphoria causes.”

Josh Block, a senior staff attorney for the American Civil Liberties Union, celebrated the ruling, saying: “This is a victory for our clients who want the opportunity to serve their country openly and freely in our armed forces.

“We will continue to hold the government accountable for their attempts to ban trans people from the military and shut down judicial review of the policy.”

The military is not the only place where the Tr*mp administration is trying to remove transgender workers, as in briefing filed to the Supreme Court last week, it argued it should be legal to fire someone from any job if they are trans.

It adds: “Title VII prohibits treating an individual less favorably than similarly situated individuals of the opposite sex.”

Related: Most Americans support trans people serving in the military

The post Transgender troops will be allowed to sue Pentagon over Trump’s military ban appeared first on Gay Times.