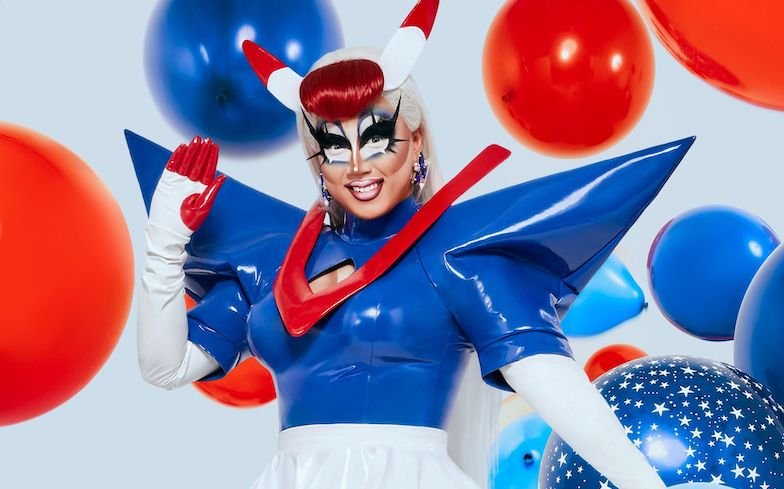 And fans and queens were not happy that one queen avoided the bottom two.

Every Drag Race season has it, and we’ve now gotten to the first controversial elimination of the series, even though we’re only two episodes in.

After the queens sashayed into the werkroom following Dahlia’s elimination, tension was soon running high between two queens. It’s possible that the next Drag Race feud is brewing between Aiden Zhane and Brita, with them speaking lowly of their competition in confessionals. Brita said Aiden was a “weak competitor” while Aiden said that Brita came into the competition thinking her status in New York would “carry her.”

For this week’s mini-challenge, the queens had to raise awareness for the declining bee population by having a beehive jive to RuPaul and Big Freedia’s Freaky Money… sorry, Freaky Honey!

All of the queens brought out their best dance moves, with Gigi Goode being named the winner.

For the main challenge, the queens had to throw a ball with well, lots of balls! They were serving three looks: Lady Baller, Basketball Wife Realness and Balls to the Wall Eleganza.

During construction of their garments, Gigi began feeling the pressure from Nicky Doll as she struggled with a concept for her Balls to the Wall Eleganza look, and she also battled with time. However, Brita, who had been talking big all season, looked stumped for a concept.

Meanwhile, Aiden created a fairly basic referee look, which she didn’t notice until Jan pointed it out, and left Jan unimpressed when she finished early, defending herself to the other queens by saying her aesthetic was generally less is more and that she lets her make-up do all the talking.

Leslie Jones was this week’s guest judge, and she LIVED to be on that panel, recording and singing Cover Girl as Ru walked down the runway, and generally bringing fun and enjoyment to the panel. The petition to have Leslie as a permanent guest judge starts here!

On the runway, Crystal Methyd, Heidi N Closet, Jackie Cox, Jan, Sherry Pie and Widow Von’Du were all declared safe. Nicky, Gigi and Jaida Essence Hall were all praised for their looks, with Gigi being named the winner of the challenge and Nicky was told by the judges to be “more wacky.”

Aiden, Brita and Rock M Sakura were all criticised for their looks, with Aiden being told she’d done too little, with Rock M facing the opposite critique, and Brita for failing to execute her pineapple dress. She certainly wasn’t channeling Manila Luzon at that point.

Ultimately, Aiden was declared safe, which shocked the other queens, with Jaida and Jan being visibly surprised. This left fan favourite Rock M to lip-sync against powerhouse Brita, and Rock M’s fate seemed to be sealed when she struggled to get out of her skirt. Although she pulled several Alyssa Edwards-esque jump splits, Brita was named the winner and a tearful Rock M was told to sashay away.

Fans were shocked with the elimination, particularly with Aiden being safe: “Aiden? Safe? and Rock M Sakura went home?” wrote one.

Another added: “AIDEN ZHANE IS FUCKING SAFE?!?!? ARE YOU FUCKING KIDDING ME????”

One fan even brought out the Alyssa Edwards “Rigga Morris” gif.

Next week, the queens have to channel their inner Meredith Grey, as they star in medical drama Gay’s Anatomy, and it looks like Jaida may have trouble with the lines. Elsewhere, Jaida seemingly confronts Aiden over not being in the bottom, while Widow is seen with a tear running down her cheek. What’s happened to set her off?

The post This was the most controversial Drag Race elimination since Manila Luzon appeared first on Gay Times.