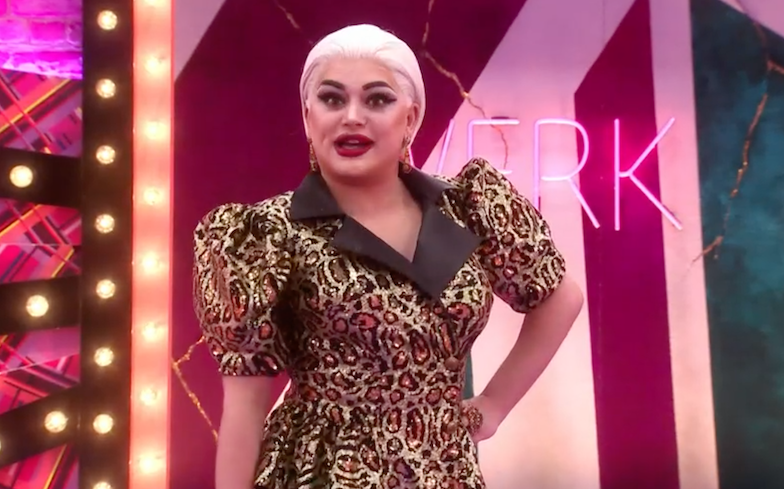 Well halleloo! Tonight, after years and years of anticipation, RuPaul’s Drag Race premiered onto BBC Three and opened up its werkroom doors in the United Kingdom to start the royal line of British drag queens.

It was fresh, British as fuck (clock Vinegar’s Kate Slater tribute?) and still felt true to the show, despite being on the BBC… In celebration, we’ve rounded up the five most gag-worthy moments from the Drag Race UK premiere – see below.

Everything that came out of Baga Chipz’s “gob”

When Drag Race was finally confirmed for a UK spin-off on BBC Three, fans were cooped, gooped, gagged, yes, but also hesitant. “Will the franchise be able to capture the British sensibility?” etc. However, when Baga Chipz sashayed into the werkroom, she made sure to let audiences know that Drag Race UK was going to be as British as mothertucking possible by telling us she’s an “MBE” who loves “gin and tonic, Coronation Street and a good ol’ shag”. Just like the rest of the UK! She kept topping herself (cleanse your mind) throughout the episode with every line that came out of her gob. We’re surprised the BBC didn’t censor “minge”…

For their first ever mini-challenge, the contestants took part in a photoshoot inspired by Anne Boleyn’s (RIP) decapitation at the hands of Henry the VIII. They served body-ody-ody, and like future Grammy Lifetime Achievement Award recipient Bebe Zahara Benet once said, “face, face, face”. Like Baga, The Vivienne provided pure British humour when she delivered a perfect impersonation of How Clean Is Your House and Big Brother legend Kim Woodburn, proving she’s a force to be reckoned with if she makes it to Snatch Game.

And for their first ever maxi-challenge, the queens ruled the runway in two royal outfits; one inspired by one of Queen Elizabeth’s classic looks; the other inspired by their hometown. The looks were fantastic, but in our opinion, Sum Ting Wong emerged supreme with her take on Queen Liz’s mug on the stamp. JUST LOOK AT THE PHOTO ABOVE. Gag.

Michelle Visage: “Your queen look was fantastic, you’ve got prosthesis, you’ve got…”

We are still screaming.

“I fucking got it, alright?”

Oh henny, Vinegar Strokes proved she do got neeeeerve when she defended herself against former Spider-Man star Andrew Garfield on the main stage. After Andrew said the Everybody’s Talking About Jamie star lacked the uniqueness in the C.U.N.T acronym, she hit back: “Just to tell you, I fucking got it, alright? It’s coming, don’t worry.” Yas Vinegar!

The first episode of RuPaul’s Drag Race UK is available to watch now on BBC iPlayer.

The post The 5 most gag-worthy moments from the RuPaul’s Drag Race UK premiere appeared first on Gay Times.