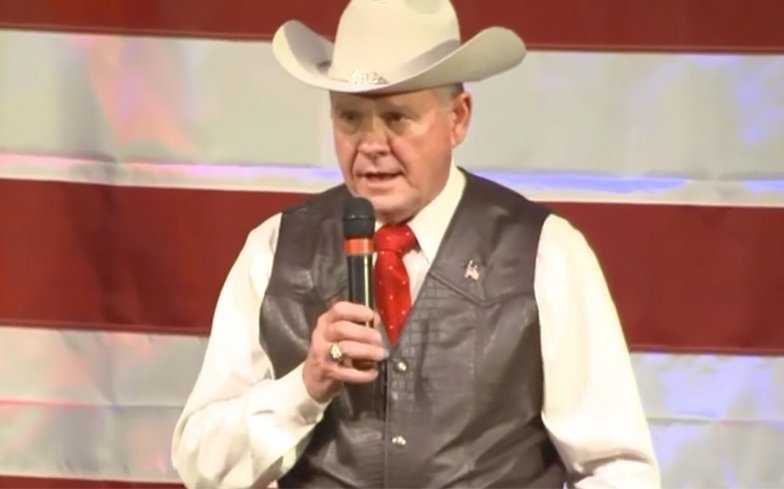 The notorious homophobe is at it again.

Failed Republican candidate Roy Moore is once again showing his homophobic colours as he attempts to get the US Supreme Court to make same-sex marriage illegal in America.

In 2015, following the Obergefell v. Hodges case, the US Supreme Court struck down laws banning same-sex marriage across all of America.

However, now that the Supreme Court is mostly made up of conservative judges, Roy Moore has filed a brief with the Supreme Court in a bid to ban it across America. Former Kentucky county clerk Kim Davis has filed a similar brief, although only to allow people to refuse to issue licences on the grounds of religious beliefs.

Kayla Moore, Roy’s wife who runs the Foundation for Moral Law, said: “Now that Justice Kavanaugh has replaced Justice Kennedy, we hope that the Supreme Court will once again allow the states to recognize marriage for what it is: a union between one man and one woman for life.”

Last year, as he prepared for his failed Senate bid, Roy Moore called for a return to the “moral” times of the 60s and 70s. “We did not have same sex marriage,” he said.

“We did not have transgender rights. Sodomy was illegal. These things were just not around when my classmates and I went to West Point and Vietnam.”

He continued: “We [now] have drag queens teaching kindergarten children in this state and this community… in Huntsville in Mobile they taught kids and they dress them up in drag.

“Where does this come from? Gender identity is being taught in California to young kids and parents have no choice but to let their kids be taught that.”

Roy has consistently caused controversy for his questionable views – he once compared sex between two consenting adults of the same sex to bestiality during a 2005 interview.

A decade later, in 2015, he suggested being forced to follow the Supreme Court’s marriage equality ruling was the equivalent of being forced to kill people under immoral German laws in World War II.

“Could I do this if I were in Nuremberg, say that I was following the orders of the highest authority to kill Jews?” he asked. “Could I say I was ordered to do so?”

He also suggested that the legalisation of same-sex marriage across the United States was “even worse” than than the 1857 Dred Scott v. Sanford decision to uphold slavery.

Related: US Supreme Court to take case that could allow adoption agencies to discriminate against same-sex couples