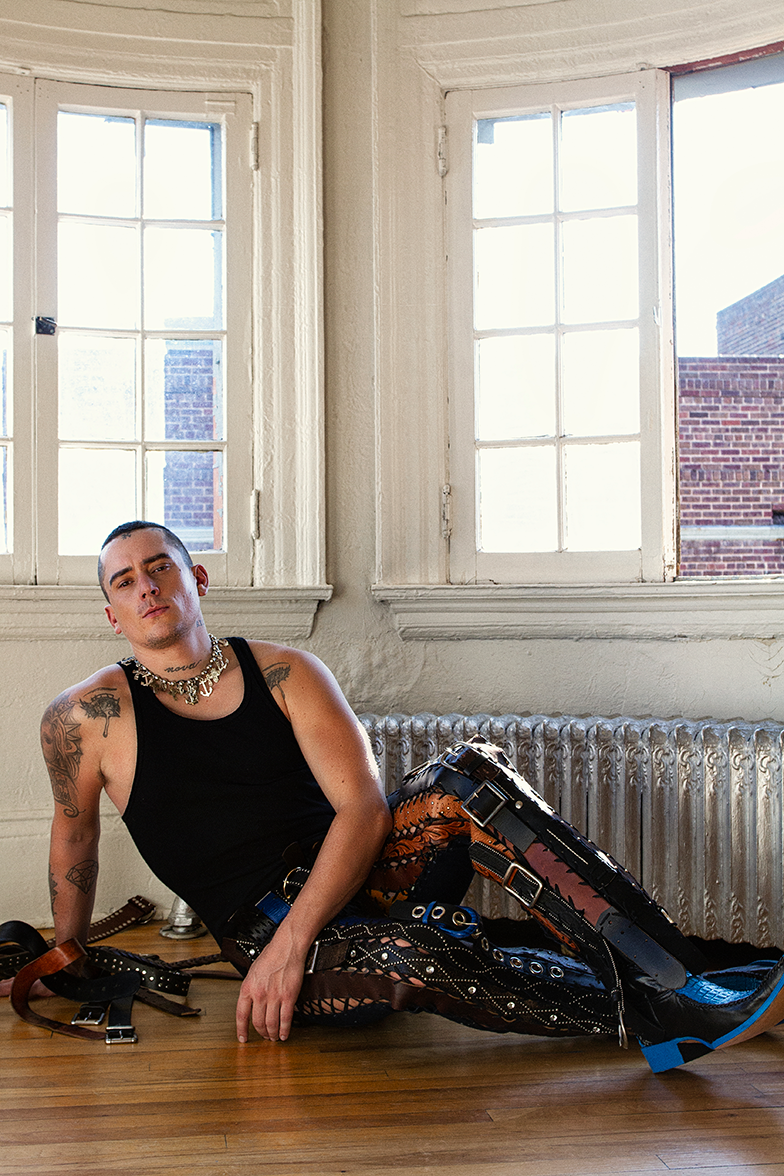 Taylor Ross, the designer behind rising label Ricky King, has succeeded in crafting work that transcends the disposable nature of modern fashion, seamlessly blending the old and the new to create something altogether timeless.

Perhaps the ultimate in DIY labels (albeit a very sophisticated one), all Ricky King work is hand-crafted and utilises a variety of repurposed materials, imbuing Ross’ designs with the authenticity of the all-American fashion he draws upon.

From bustiers made of cowboy boots to dresses made of belts, his work is never one-dimensional even when it is minimalistic, hiding layers of conceptualism in its stitches. Ross is best known for his pieces that can only be described as a modern Western fetishist’s wet dream, marrying the yeehaw energy of the classic cowboy with confronting futuristic styles.

This was most notably showcased in a collaboration with Lady Gaga, propelling Ricky King even further into the industry’s focus. More recently, Ross has experimented with a larger variety of American iconography and talks to us about how leaning into the inescapable homoeroticism of the sailor, greaser and cowboy allows him to challenge traditional notions of masculinity.

Here he also speaks about the future of Ricky King, why he has Jean Paul Gautier’s initials tattooed on his forehead, and whether all fashion can be classified as art.

Where does the name Ricky King come from?
The name Ricky King came in part from a cousin of mine who passed away young, he was a rodeo guy and a rancher. I was doing a lot of Western-inspired stuff at the time and thought it would be a nice tribute. It sounded good and it stuck!

What prompted you to transition from your background in painting and sculpture to fashion design?
I transitioned from painting and sculpture because I thought fashion was a lot more tangible and accessible. After a few years at art school, I was doing small gallery shows and just kind of burned out on it and ended up dropping out. I’ve always been into clothing and style and the skills I learned doing fine art fit nicely into fashion design and construction. I saw something once that said fashion isn’t art, but I think art is determined by intention. Not all fashion is art, but some is.

Who has been your biggest fashion inspiration and what is one style rule you learned from them?
The one designer that I always go back to is Jean Paul Gaultier. I’ve got his initials tattooed on my forehead! Watching his work has taught me that twisting or distorting something you’ve seen a hundred times can make a huge impact. His women are strong and sexy, and his men have the masculine leaning androgyny that I love.

Much of your work is constructed from items found at vintage dealers and thrift stores between Denver and LA which you transform into new, distinct concepts. Why is it so important for you to produce pieces that utilise pre-existing materials?
I like using reclaimed materials in my designs whenever I can. There are so many existing materials in the world that can be altered or re-constructed to make something totally new. Ricky King started as a DIY brand and technically still is, I’ve just added a bit more polish over the years. Fashion waste is something I think about a lot, and using found materials rather than manufacturing is always a plus for me. I’ve been shopping in thrift stores my entire life, it played a huge role in me learning to design and construct.

Many people will recognise your work from Lady Gaga’s music video for her song John Wayne, in which she featured a bustier made of old cowboy boots. What was it like designing for her?
Working with Lady Gaga for the John Wayne video was great. I had room to do what I wanted, and her team was fantastic. In this industry, you can really feel when someone appreciates the work, and I felt that from them in spades. A lot of her early fashion was major for me, so it was a big moment.

If you could choose anyone, who would you most like to create work for next?
I desperately wanted to dress Catherine O’Hara’s character in Schitt’s Creek, but seeing as the show is ending, I missed my chance! One of my favourite musicians is Chris Isaak, I’d love to make a custom painted suit for him. Orville Peck is another. He’s worn a few of my pieces and I’d love to work with him more going forward.

Americana, the fourth Ricky King collection, draws heavily upon iconic and deeply nostalgic, American imagery, from sailors and greasers to cowboys. What is it about these styles that resonates with you so much?
Something about these iconic masculine images from the past just speak to me. They are like visible markers that reflect the times in which they existed. Twisting that imagery to make something new and kind of subversive in modern times is really fun, and can make a big statement about societal rules and how they don’t have to apply anymore.

In addition to these figures being stereotypes of all-American men, they also have a strong association with homoeroticism, such as in the work of Tom of Finland. How much does the queer sexuality of this type of iconography influence your work?
Queerness and homoeroticism have definitely become key in the Ricky King look. It goes back to there being less restrictions now for how people dress or present, altering classic ideas of masculinity to the point that it’s almost confusing. Something to make people double-take or think twice when they see it. For me, it’s kind of the ultimate juxtaposition and has made me feel a lot more comfortable with what I like and how I am. I buried my bisexuality and identified as a gay man for a long time because I thought I needed to. Getting into these artists and images has helped me embrace the ambiguous parts of myself.

Western fashion, in particular, has experienced a resurgence in the past few years, with your Western designs amongst your most popular. Why do you think this is?
I’m not totally sure why Western wear became so popular in recent years, might just be the cycle of trends repeating. My personal style has changed many times over the years, but something that has always been a constant for me since high school was a great pair of cowboy boots. I grew up around the rodeo and ranchers in Colorado and Arizona, so it’s something I think I will always carry with me to an extent. But I never wanted Ricky King to look like a costume of a cowboy or a rodeo clown. I prefer Western-inspired clothes to be more chic and understated.

For Americana you created standout digital collages with surreal backdrops of American tropes; is this a medium you plan on experimenting with again in the future?
I’d love to elaborate on the surreal imagery going forward. It’s an escape for the viewer and can frame the clothing in a whole new way. Some of my favourite artists to follow online do similar fashion-based surrealistic collage imagery.

Which of your pieces has been your favourite so far?
The cowboy boot bustier is a classic at this point. I’ve seen a lot of people recreate it over the years which is really cool. Also the gown I made entirely out of reclaimed belts last year is an all-time favourite. Heavy, noisy and iconic!

What other artists/designers are you watching at the moment?
I’m a bit ignorant when it comes to artists and designers working today. But there are a few brands that I always check out, like Dsquared2 and Margiela. Wesley Berryman’s work is really cool, and it’s been fun watching Christian Cowan do so well after we participated in the Gaga video together. Outside of fashion, I’m really into the music of Orville Peck, Tiger Army, and Billy Raffoul right now. I’ve been looking to them for inspiration in my own music project I’m working on in my free time.

Do you have any tips for people looking to start a career in fashion, especially for those who want to make the leap from art to clothes design?
I would say it’s going to be really tough, but worth it. Coming from an art background, I wasn’t prepared for the business end of fashion, and it continues to be the hardest part for me. So I would suggest reaching out to people who you respect in the industry for help and not being afraid to learn something new.

And finally, what can you tell us about what’s coming next for Ricky King?
I have been doing small scale in-house manufacturing since the beginning. Going forward I want to find a responsible, ethical manufacturer to help me bring Ricky King to more people, and so I can focus more on concepts and design. I will remain open to collaborations and guidance, and hopefully, I can continue to grow the Ricky King brand!

The post Ricky King: Meet the designer behind one of the most sustainable fashion labels appeared first on Gay Times.