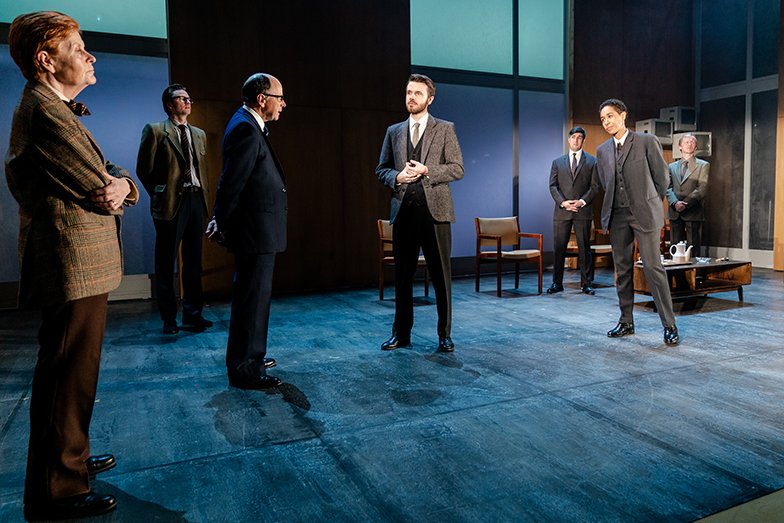 Tom Morton-Smith’s show about a politically-charged chess match has opened at the Hampstead Theatre, directed by Annabelle Comyn.

Ravens presents an intriguing true story – set during the time of the Cold War, it tells of a world chess championship final between American Bobby Fischer and reigning champion Russian Boris Spassky. Set in politically-neutral Reykjavik it was, at the time, dubbed the ‘Match of the Century’. This play focuses not so much on the actual chess playing, but everything else happening around it – specifically how the matches play out in the media on the international stage, and the psychological impact of the competition on these two very different men.

There’s plenty of interesting material to work with here – our protagonists don’t simply represent two very different ideologies, but also completely different approaches to the game itself. Over the course of the show we witness the maverick Fischer’s peculiar behaviour become increasingly erratic and unpleasant. Spassky, on the other hand, a fan of convention and order, becomes increasingly paranoid about his opponent’s demands and the possibility he’s trying to gain an unfair advantage.

It has the potential to be an exciting psychological drama, but we don’t think this production quite hits the mark it’s intending to. We’re aware it’s a tricky task to present genius and brilliance on stage, but never at any point to we get to see just how impressive these two players are. The psychology in the play is very much surface level – it would be interesting to see more of what’s going on inside their heads, as opposed to witnessing yet more inappropriate behaviour from Fischer, or Spassky making another accusation of foul play. We feel like we’re only scratching the surface.

Instead of seeing the chess being played, we’re presented with choreographed movement sequences showing the unfurling battle on the board – which is reasonably effective but fails to convey the excitement of watching two grand masters at the top of their game. The matches never feel as urgent as they should. It isn’t helped by the over-long running time – it comes in just shy of three hours, and there simply isn’t enough excitement to engage us for that long.

Ravens: Spassky vs Fischer works with some interesting material, and the story it tells has the potential to be fascinating. However, it needs some substantial edits to make it a more enjoyable viewing experience. We’d like to explore what’s going on in the two players’ minds a bit more, and some excitement injected into the matches themselves (there are a lot of them) wouldn’t go amiss. In its current form, however, it’s just not entertaining or engaging enough for us to recommend.