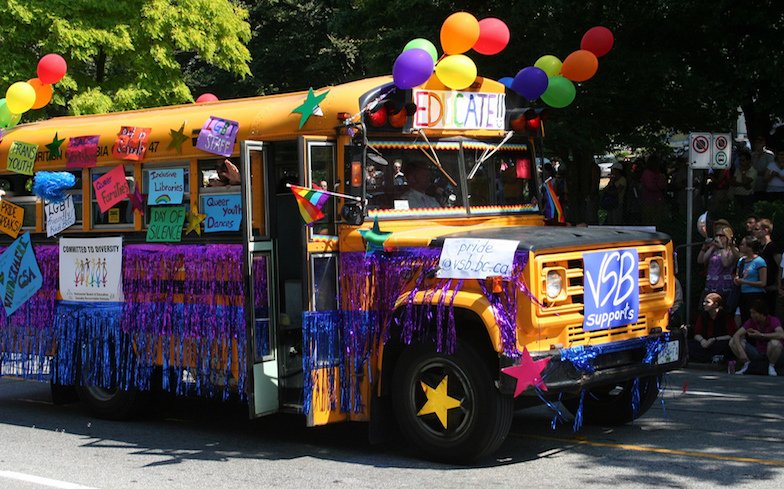 Robin Stevenson had been due to talk about her book, Kid Activists.

LGBTQ author Robin Stevenson was due to give a talk at the Longfellow Elementary School in Wheaton, Illinois last month. However, the night before the talk was due to be given, Stevenson was told it was cancelled.

Writing on her website, Stevenson revealed the reason behind the cancellation was due to the appearance of Harvey Milk, the first openly gay elected official in American history, waving a rainbow flag on the book’s cover. “The reason given was that a parent had complained because one of the activists included in the book is Harvey Milk,” she wrote.

Kid Activists is a biography about several activists in the world, focusing on their lives when they were children.

In a letter to the District 200’s Superintendent, Jeff Schuler, she wrote: “In choosing to cancel the presentation, you denied 175 students the opportunity to hear a presentation from an award-winning children’s author.

“You legitimized a concern rooted in homophobia, gave this priority over the wishes of the school administration and staff who had requested the visit, and made the climate in the school less safe for LGBTQ+ staff and students.”

She added: “As a result of homophobic comments made by adults in their community regarding my book and canceled visit, they are now feeling apprehensive and afraid to do so.”

However, district officials claim her visit was cancelled as parents hadn’t been given adequate information about what her talk would entail. “The event was not canceled because of a specific character in the book; the event was canceled based on the lack of appropriate notification of the author’s visit,” wrote a District 200 spokesperson, Erica Loiacono, on Medium.

The spokesperson added: “In District 200, we care deeply for all students. On a daily basis, our staff works very hard to ensure that we are creating and sustaining an inclusive culture where all children feel safe and supported.”

Speaking to the Daily Herald, Stevenson said she wasn’t even planning on mentioning Harvey Milk during the talk, instead focusing on activists like Martin Luther King, Jr., or Susan B. Anthony, as well as modern day activists like Autumn Peltier.

She also added that she’d heard from anonymous officials that the talk was actually cancelled over fears it would prove to be too “controversial.”

Continuing, she said the cancellation of her appearance would send a “very harmful message to students, particularly students who are themselves LGBTQ+ or have family members who are part of the LGBTQ+ community. It says their lives can’t be talked about, that their very existence is seen as shameful or dangerous.”