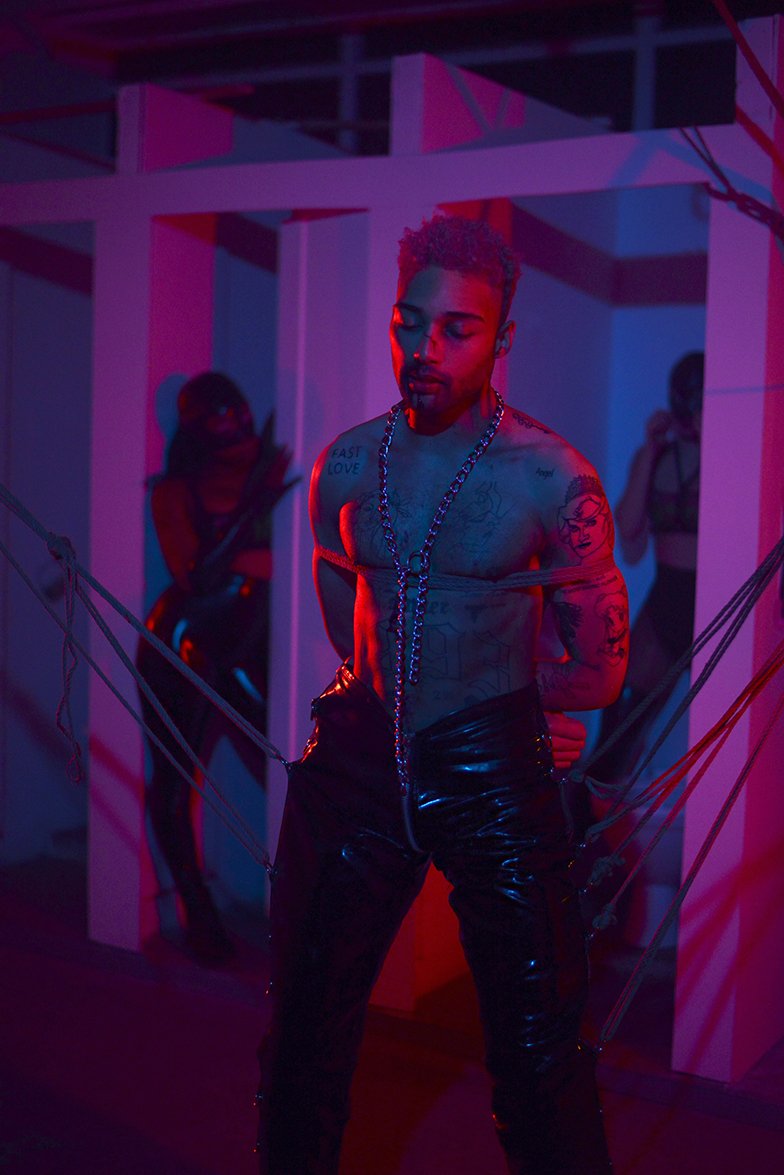 Every now and then, an artist appears who feels like they could genuinely make a change in the music industry. James Indigo is one of those people.

His debut single and video CXNTOUR – which premieres right here, right now on GAY TIMES – is an unapologetically brash, bone-rattlingly powerful future queer anthem that celebrates all members of the LGBTQ community with an “I’m that bitch” mantra at its core.

Even more powerful is the fact that James is an out and proud gay man in an industry that historically hasn’t been very welcoming to members of the LGBTQ community – at least not in the mainstream.

“I bet there are a lot of gay rappers out there who are in the industry who haven’t come out and are keeping it quiet. If I say to someone now, ‘Do you know a UK rapper who’s gay?’ no one can say anything to me,” he tells us.

“This is 2019, and there’s not a single gay UK rapper who’s on the radio or has mainstream success! That’s why I want to make sure I tell people I’m gay, and I want to be the first person to make a change and show the world that you can be a rapper, you can be gay, you can be of colour, and you can make great music.”

We spoke to James about the importance of being overtly queer in his music, how Kylie Minogue’s classic Fever album helped shape him as an artist, and the impact chart-topper Lil Nas X coming out as gay will have on hip-hop culture.

The music video is giving me major American Horror Story vibes. Where did the inspiration for that come from?
So me and director Kassandra Powell sat down and we played the song, and she asked me how the video should look. Firstly, I wanted to celebrate diversity, I wanted to bring all my friends in, I wanted to bring everyone who is black, tall, lesbian, skinny, pregnant, everything. Then, because I’ve got all these personalities in my head, I just wanted it to be loud and out there and crazy. There are deeper meanings, though. You can see at the start that I’m tied up and bloody, because I feel like in this world we come across a lot of restrictions, especially being gay and being of colour, growing up was difficult, and I wanted to show that you can be bloody and tied up but still be that bitch, and still own who you are. Even when I’m locked in the cage and I can’t get out, I’m still owning that. It’s taken me a year to get here. I recorded the song a year ago but I didn’t want to rush anything out until the visuals were executed exactly the way I wanted them to be.

There is a stereotype that queer people are quite soft and passive. What I love about the video is that it shows you can embrace that queerness and femininity but still go hard and be powerful.
One hundred per cent. Growing up, the only gay people I knew were Elton John and Paul O’Grady, and as much as I love them, I never knew first of all that you could be both gay and black – as silly as that sounds now – and that not every gay person has to fit into a stereotype. You’re just a human being who’s gay. So I wanted to do a video that shows you can be feminine and you can be powerful at the same time. There are two lesbians in the video who are owning their sexuality as well. It’s exactly what you said, I wanted to show that you can be gay and powerful, and you can be gay and come in all different shapes and sizes.

Watching a video like this reminds you of how little representation there is elsewhere. Why do you think it’s so important to have all these diverse people on show?
Because this is what’s going on in the world right now. There are people who have bodies like that, there are people who are black and gay, there are people who are pregnant, there are people who are lesbians. This is just me showing the world what’s out there. It’s like when people don’t want to see gay couples on TV – this is what goes on in everyday life. We’re here. There are gay people from all walks of nature and we won’t be silenced. Even when I was making this video, there were people saying, ‘You’re gay and you’re black, so you’re representing that community as well, so maybe you should do this or that instead’, but I’m like, ‘No, that’s not me being true to myself and who my friends are’. I wanted to make sure that I was showing the world this video. That’s why it’s taken so long. I didn’t want to just put shit out there, I wanted to make sure I’m doing something no one else is doing to showcase me being me. 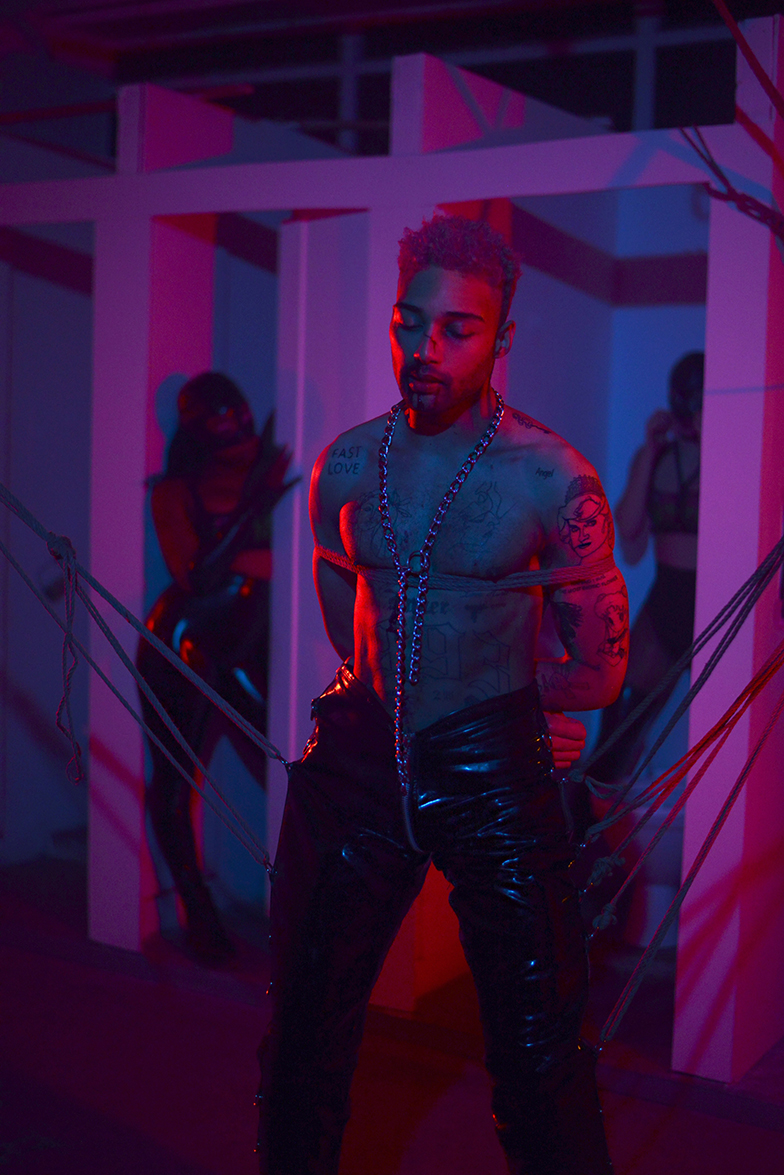 The song has a lot of queer vernacular like ‘wig snatch’ and ‘serving face’ – is being overtly queer in your music something that’s important to you?
It is, because even though I would say I’m a rapper who happens to be gay, I do not want to silence my queerness to fit a certain market. The next song I’m working on is called Daddy’s Coming Home, and a lot of the things I’m talking about are not as gay as this, but I have to make sure I’m talking about being gay and including gay references in every song I put out because I am gay, and the reason I’m doing this is for the little James Indigo growing up to see and go, ‘Oh wow, if he can do this, if he can be gay and say these words, it’s fine and I can as well’. That’s the message. It’s not about making money, it’s not about wanting fame, it’s about making a change. I’ve had enough of people complaining, so instead of complaining I want to be the change I want to see.

Who were some of your music icons growing up?
It’s a mixture. My first album was Kylie Minogue’s Fever, I was eight years old I think, and I also had a Mis-Teeq album and a Miss Dynamite album, so I had these pop and garage and MC influences going on – and Madonna as well! I love her. Madame X has literally blown me away. It’s so experimental. I love people who stay true to who they are. 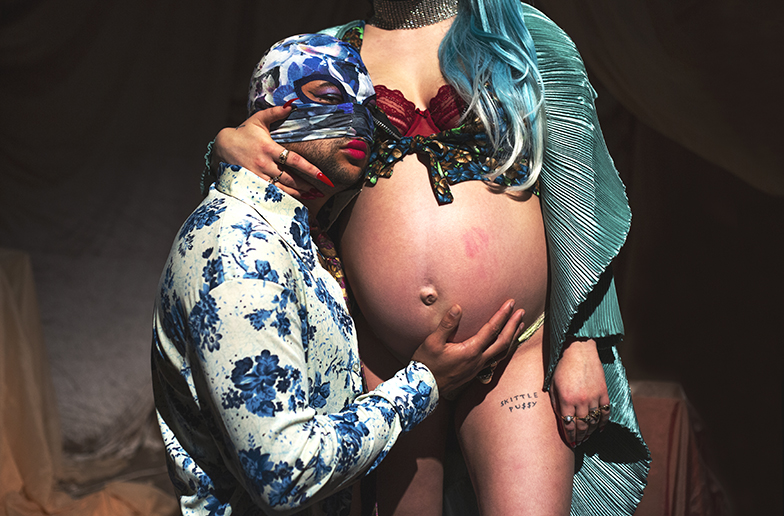 Lil Nas X came out as gay recently, which was a huge moment. What do you think something like that means to the queer community – especially queer people of colour?
I think it’s great, although when I shot my video months and months ago, I had a cowboy hat on, and now that’s his thing, so I’m thinking, ‘Do I need to change my image?’ [Laughs] But apart from that, I think it’s amazing. People didn’t know he was gay to begin with so he got this big straight following, and then when he came out people were like, ‘Oh actually, he’s making good music’, and I think people are able to look past his sexuality, and say, ‘We see gay people every day, we work with them, we get served by them, and there are also gay people who make good music’. I think it’s about normalising it. We are just normal people who happen to be gay. It’s part of us. So I think that’s made a great impact, especially because he’s a person of colour and he’s current, it’s great.

Young Thug said in an interview that Lil Nas X shouldn’t have come out as gay, not because he doesn’t support him, but because he’s worried about the backlash he’ll face. Do you agree with that view point?
I think people should just say, ‘Fuck it’. Even when people see my video, some people won’t like it. He is a gay person and he shouldn’t have to feel that he shouldn’t come out in order to please other people. These are people he doesn’t even know, and he shouldn’t have to silence himself for anybody. If I receive backlash, I don’t really care, because I’m gay and that’s who I am. If there’s backlash, those people need to educate themselves.

With Lil Nas X coming out, and shows like RuPaul’s Drag Race becoming so popular, do you think these are signs that queer culture is becoming mainstream?
I feel like it is becoming mainstream, and I feel like that’s 50/50, there’s good and bad. It’s good that it’s becoming mainstream, but people need to understand that it goes deeper than that. There are people who get hurt on a daily basis for being queer, it’s not just bright colours and fun, these are people’s lives. Being gay in 2019 is still a struggle. I do like that they talk about our struggles in Drag Race, for example, and I think things like that do have an impact.

Where are you planning to go next? Can we expect an album?
I just want to make loads of music, make amazing videos, perform, and try and make a change. I’m heading towards an EP, but I want to focus on singles and visuals at the moment, because I’m not known yet, I don’t want to do a big album because I feel like that just gets thrown in the bin. I want to introduce people to who I am and what I’m about first.