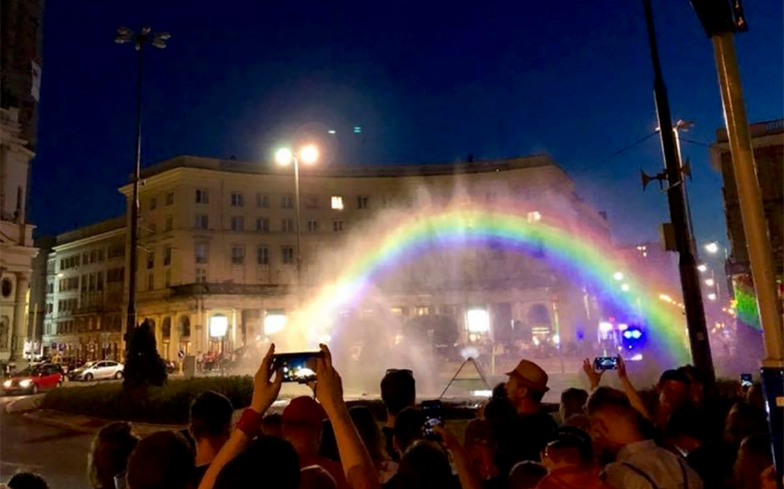 LGBTQ activists held the march in the city of Plock.

A Pride march was held in Poland yesterday (August 10) after a previous march in Bialystok was marred by heavy violence from counter-protesters. This march took place in Plock, with police protection.

Around 2,500 activists gathered in Plock and marched through the city waving Pride flags. Due to the police presence, there were no large repeats of the violence seen at the previous march.

Counter-protesters were present, with some shouting homophobic remarks while others waved signs reading: “Enough of LGBT propaganda sponsored from abroad.” There were also some minor fights reported, with two people taken into police custody.

Robert Biedron, one of Poland’s first LGBTQ politicians and leader of the Wiosna Party attended the march. Reuters reports in a speech given before the march, he said: “For many years in Poland not much was done to handle such violence. It’s time for these hateful crimes to be punished.”

Politico reports Biedron as saying: “We have to be here for freedom. We want to convert [leader of the ruling Law and Justice party Jarosław] Kaczyński and the Catholic church.”

One shopowner, Monika Bujak, who was part of the march, shared fears of what could happen. “This is a situation created by PiS and the church,” she said. “They are creating a spiral of hatred for political reasons. This is going to lead to blood in the streets.”

Poland has also been hit with a wave of homophobia from both the media and religious figures lately as well. Gazeta Polska, a Polish newspaper which supports the Law and Justice Party, began distributing stickers with ‘LGBT-free zone’ printed on them.

The stickers were eventually stopped by a Warsaw district judge, and some advertisers abandoned the paper over the homophobic stunt. Bloomberg reports that in an editorial, the paper wrote: “LGBT is not a minority, it’s a paradigm which appears to have all the features of a totalitarian ideology.”

In a statement, IKEA said they fired Tomasz for “using quotes from the Old Testament about death and blood in the context of what fate should meet homosexual people.”