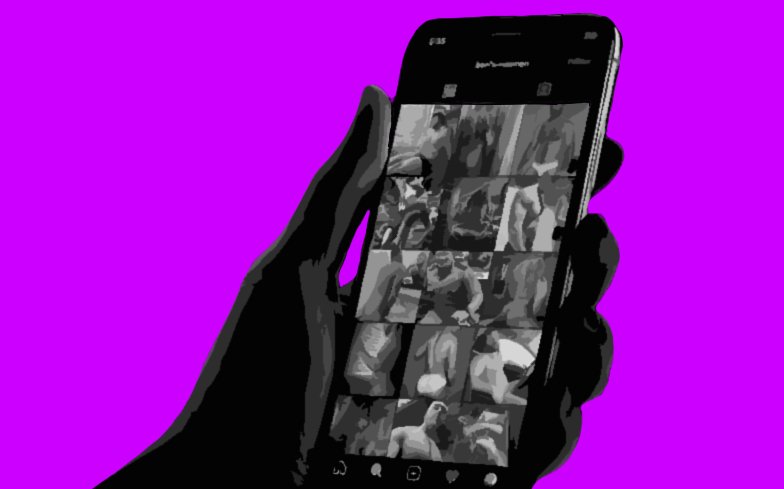 It’s been three years since the popular gay Instagram feed Hoscos made some vivid statements when it was questioned about its stylised and whitewashed celebration of men, targeted at gay men.

At the time the account had around 315k followers, and the ensuing media storm only increased its follower count. It did, though, change Hoscos’ approach to representation on its feed. Since then, the bodies and faces of Black, Asian and Minority Ethnic men (BAME) have been featured. I won’t repeat the comments from three years ago, as there is now a clear consideration, and importantly, an understanding of the responsibility of a platform that claims to speak to and represent our communities.

Why are so many of these ‘Hot Guy’ Instagram feeds that are not only all white but all cisgender and all buff? What does it say about standards of beauty in the gay community?

As so often happens, a friend forwarded me a picture of your typical hot, white, cisgender, muscled, light-eyed Instagram hunk featured on a ‘Hot Guys’ page. As I scrolled down, I was reminded of  #HoscosGate: a sea of beautiful, stunning white men, clearly targeted towards gay men. There were no BAME men that I could see, and I scrolled as far back as 2017. I reached out to the page, with a polite, “Hi There [name of page] great page, I have a question, I hope you don’t mind. Why do you not post pictures featuring men of colour?” I was blocked. I sent variations of that message to 25 Instagram pages, and all either replied or blocked me. There were two consistent replies: the first being that guys pay to be featured; the second that men of colour ‘do not like to be featured’. When pressed on that I was told that ‘they don’t want to be on gay pages’.

Across 25 accounts of men deemed ‘hot’ by anonymous curators, the same men appear multiple times. Are they really paying to be featured each time and on each account? Given I was told anywhere between $25-$50, one would rack up quite a bill. I took a chance and reached out to one of the guys featured on multiple accounts and he told me, “They feature me for free!” Armed with that knowledge, I went back to a few of the pages. This sparked a long conversation with @beefcakesmen, whose Instagram feed boasts 1,710+ images and 302k followers.

Let me try and define the @beefcakesmen aesthetic; 30+, beefy, muscled, hairy, gruff, scruff, rugby types and always, importantly it seems, white.
The issue here isn’t @beefcakesmen’s licence to curate whatever feed it chooses, but the larger and more problematic perception of what makes a man hot, sexy, handsome and/or beautiful to the gay community, someone worthy of gracing pages and pages of anonymously curated Instagram feeds. What responsibility do these feeds have in meaningfully representing the beautiful diversity in our communities? In my DM exchange with @beefcakesmen, the owner struggled to justify their position, never quite owning their discrimination in the way Hoscos ultimately did.

@beefcakesmen also populates its feed using sites like Tumblr. These images are unsolicited and posted for free. But if the business model is ‘hot’ guys paying to be featured, why the lack of men of colour? “I guess they only see white guys and think that they don’t have a chance to be on the page.” Funny that! I imagine a more inclusive business model would be more lucrative.

@beefcakesmen says it “makes me sad” that people think decisions are based on skin colour, but – they explained – they also “[don’t] care because it’s their choice [not to send in their photos and pay].” But whether people pay or are chosen, all the men featured are still white. When I press why that might be @beefcakesmen says, “Because that’s all I see on Tumblr” — like there isn’t the entire internet at their disposal. It was painful to have a conversation with someone contorting their way around the question, knowing they were slowly backing themselves into a corner.

This is not the first time the page has had this discussion, they admit: “guys called me racist because of that.” It was a poignant moment I hoped would have sparked some introspection, in the vein of Hoscos. However, I was told, “I was going to start looking for men of color to stop being portrayed as this villain who doesn’t post men of color, but my personality is not like that.”

I also spoke with the cleverly executed @the_LA_basics, a sartorial Instagram feed exclusively featuring Ken-like dolls that lifts the lid on the nature of ‘basic’ LA gays. While inclusion is certainly part of the brand, representation among its 335 posts had also come into question with its 61k followers: “I have [a Black doll] but I get shit because it’s not ‘Black enough’.” Even with Ken-like dolls, a lack of visual diversity and inclusion jars.

Curated Instagram feeds, Tumblr pages, magazine covers – whatever the platform – if it is designed to speak to our community and only wants to validate and celebrate buff white men, it draws a very clear, and damaging racialised line in the sand. These feeds have a real-world impact on how queer men of colour are treated within the community and how they ultimately value and view themselves.

If you are unable to identify attractiveness in anything other than a white man with a ‘hot’ physique, it’s likely because of centuries of force-fed platforming of a standard of beauty that leads you to believe people of a specific ethnic group are more beautiful (and thus more valuable) than another.

I appreciated the open dialogue with @beefcakesmen and perhaps unsurprisingly four days after our exchange @beefcakesmen posted a picture of a Black man.

@beefcakesmen and @the_LA_basics have given full consent for our conversations to be used in this piece.

The post I asked 25 ‘Hot Guy’ Instagram pages why there were no men of colour. Here’s what happened… appeared first on Gay Times.