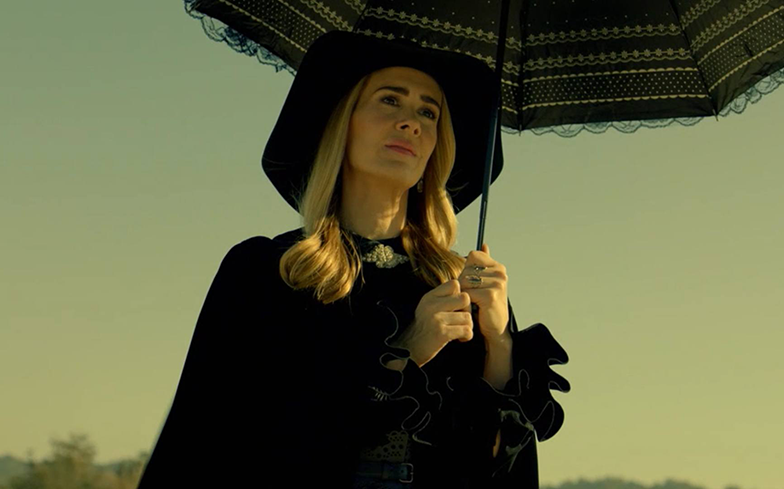 From the ever-elusive theme, to which famous faces will be returning, to the expected premiere date, you can find out everything you need to know about American Horror Story season 10 below.

There’s no official premiere date for American Horror Story season 10 yet, but it always begins in the Autumn.

The four most recent seasons (Roanoke, Cult, Apocalypse, 1984) have all premiered in September, so we’re going to assume the same will happen this year.

American Horror Story airs in the US on FX, with episodes broadcasting in the UK the following day on FOX.

Who will be starring in it?

Right now, we’ve only got confirmation of one returning star, but it’s a big one. Yes, fan favourite and Emmy-winning American Horror Story veteran Sarah Paulson is coming back to our screens after taking a hiatus last year.

“I did ask Ryan, if the question was asked to me, could I say that I was coming back, and he said ‘yes you could say’. So, yes I will be back on American Horror Story,” she revealed.

Sarah didn’t have information on which character she will be playing or what the theme of season 10 will be, but when asked if she will be a series regular she replied, “I should hope so,” and said “God willing” she will be back for more seasons too.

Another fan favourite that might be returning is Kathy Bates, who’s played some of the show’s most memorable characters including Ethel Darling in Freak Show, Iris in Hotel, The Butcher in Roanoke, and of course the vile Delphine LaLaurie in Coven.

During an interview with US chat show The Talk, she teased: “I know [creator Ryan Murphy] is gonna bring some of us back. And Brad Falchuk, who also writes and produces that show, sent me a big bunch of roses. So, I don’t know.”

Elsewhere, creator Ryan Murphy has teased that many of the show’s original stars will return, saying: “The people who helped build this show into what it is, who believed in it from the beginning, have been contacted and are interested.

“If you look at the iconography of the first three seasons, you can figure who I’ve gone to and who might be coming back.”

Fans are typically drip-fed news of cast members throughout the year leading up to the season premiere in Autumn, so we’ll keep you updated when more stars are announced.

In the meantime, here are 12 iconic stars that we need to see return for American Horror Story season 10.

Again, we don’t have too much information yet, but what we can say is that it’s unlikely that fan favourite Jessica Lange will be returning for another season.

But when she was recently asked if she would return to the show in a regular capacity, she said, “I don’t think so… I don’t think I would want to start from scratch and create a character.”

She continued: “I think a lot of the actors that I was working with, people that I really love working with, like Sarah [Paulson] or Frances [Conroy] or Kathy [Bates] – I don’t know who’s in this new season, but I don’t think it would be the same.

“We were like the old-fashioned troupe of actors, just moving from one part to the other. That was part of what I really loved about doing it was you’d come back with a whole different story, different characters, but the same actors year after year.”

Maybe Ryan Murphy’s plan to bring back the original stars of the show could convince Jessica to return? We’re keeping our fingers crossed.

Another actor we aren’t expecting to see return this year is Evan Peters, who appeared in every season of the show until 1984, explaining that the show had a negative effect on his mental health.

“I’m goofy, I’m silly, I like to have fun. I don’t like to yell and scream. I actually hate it. I think it’s disgusting and really awful, and it’s been a challenge for me. Horror Story sort of demanded that of me,” he said.

He did, however, recently tease “never say never” when asked if he would return to the show at some point in the future, so we’ll just have to wait and see.

Ah, the ever-elusive theme. Each year, fans spend months trying to decipher what the theme of a new American Horror Story season could be. It’s usually made a little easier when teasers begin to surface, but that hasn’t happened yet.

Fans have already come up with a theory, though, that the penultimate episode of American Horror Story: 1984 might’ve revealed the theme for season 10.

After creator Ryan Murphy teased that the eighth episode of 1984 would include “a big” clue as to what fans can expect next year, viewers picked up on several references to aliens and space, including Mr Jingles saying he feels like he’s “floating in space”.

Longtime fans will remember this is a concept that was briefly explored in the show’s second season, Asylum, when Kit (Evan Peters) was abducted and lifted into a spaceship. Are aliens about to make a comeback? Will we finally find out what happened to Kit?

You can read more about this theory here.

Not yet. American Horror Story’s cryptic teaser trailers usually begin to appear across social media two months ahead of a season premiere, with a full-length trailer showing actual footage from the season being released around a month before.

In the case of the most recent season, 1984, teaser trailers appeared in July and a full-length trailer dropped in August. We’d suggest checking back here around a similar time this year for updates.

Will this be the final season?

Following rumours that American Horror Story would end after its 10th season, FX thankfully announced that the hit anthology series would be returning for seasons 11, 12 and 13, much to the delight of longtime fans.

Considering the number 13 holds significance in the horror genre, FX networks chairman John Landgraf has teased that the show “could” potentially end after its 13th season – although he wouldn’t confirm anything.

“It will be poetic, won’t it, if it ends after 13 seasons?” he said. “It could be one of those weird things where we keep going, and it ends up being 20 seasons, I don’t know. I can just tell you that if it ends up being 13, that’s kind of awesome.”

Related: We ranked all 9 seasons of American Horror Story from worst to best

The post Here’s everything we know about American Horror Story season 10 appeared first on Gay Times.