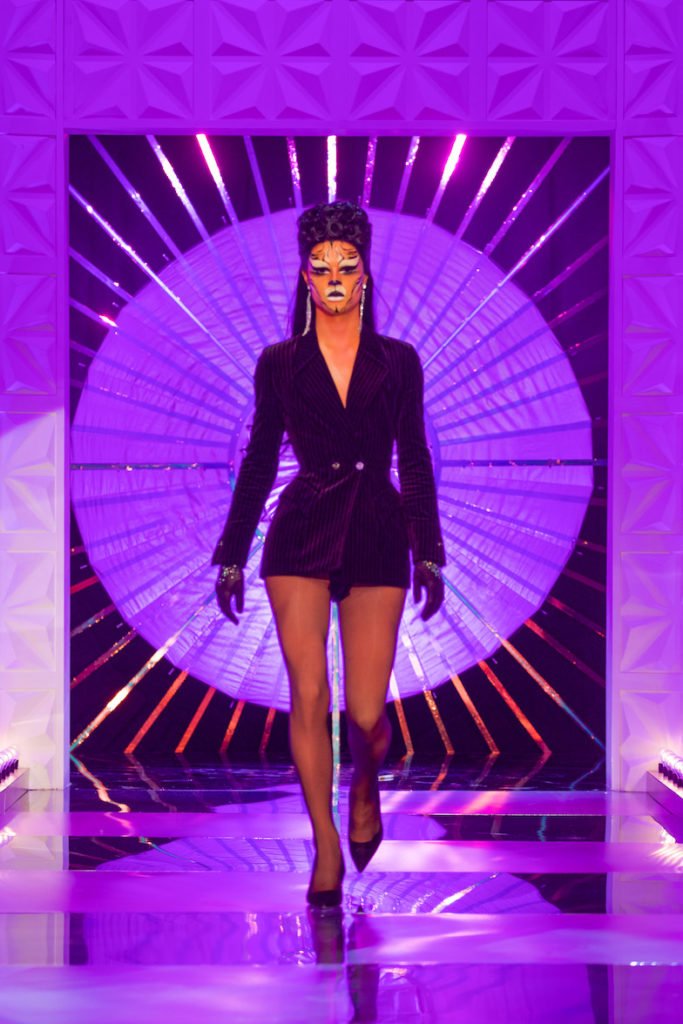 Going home first on a regular reality competition show is not… ideal. Does anyone remember the first eliminated competitor from the fifth season of X Factor or the 57th season of Big Brother? No. No one. But Drag Race isn’t a regular show is it henny?

“Everyone remembers the first queen out, nobody remembers the second or third queen,” laughs Gothy. “I’m not disheartened by my place in the competition because I got on. Imagine how many people have applied and are going to apply, like?”

This week, the star became the first eliminated queen from the Emmy-winning franchise’s incredible British spin-off, which sees the return of RuPaul and Michelle Visage, as well as newcomers such as Alan Carr and Graham Norton.

We spoke with Gothy about her time on the series, whether she’d return for a future season of All Stars and who she would’ve picked for the show’s iconic Snatch Game challenge. Oh, and she has the perfect response to Alan Carr’s “estate agent” critique…

You must be having a crazy day. How are you feeling after last night?
It’s been an emotional rollercoaster, but the outpour of love has been insane. Going home first, you expect there to be a lot of negativity but 99% of it has been positive, so I can’t complain!

How did it feel watching the episode back?
It was pretty mental, especially because I was watching it at a viewing party, so you’ve got the reactions of everyone in the room, as well as yourself. You can feel everyone’s emotions when they’re watching it, which is nice, but obviously I’m about to be eliminated and I know what’s going to happen. So I’m there like, ‘Oh no I hope no one hates me!’ [Laughs] But no, it was really chill and I did enjoy watching it. That was my first time ever lip syncing as well, so I was really nervous to watch it. I thought, ‘Oh god, I’m gonna be a trainwreck.’ I’m actually really happy with the outcome. I think I showed my personality and my vulnerability as naturally as I possibly could.

Well, you’re now in the company of some pretty legendary first-out queens such as Pork Chop, Shangela and Miss Vanjie…
I know! Exactly. I’m not disheartened by my place in the competition because I got on. Imagine how many people have applied and are going to apply, like? I’m really lucky to have been chosen and I’m really happy to have been on, even if I did go first!

Like Crystal said as well, it’s pretty “punk rock” to go first because you’ve made HERstory.
Yeah! And everyone remembers the first queen out, nobody remembers the second or third queen…

Was there anything that didn’t air that you would’ve liked audiences to see?
I wish they would’ve shown me changing from the tiger to the queen because we only had 45 minutes. I had to wipe off that makeup and do it again! I would’ve liked people to have seen how much of a stressed wreck I was when I was doing it [laughs].

45 minutes?! Your mug was beat!
Thanks darling. I did alright didn’t I?

Did you agree with the judges’ critiques?
Obviously, when you’re going out to the runway, you’ve already critiqued yourself. You already know what you’ve done well on and what you’ve not done well on. So, when you’re hearing the judges’ critiques, you’re listening to them, but you kind of already know. It’s nice to have advice from people who have been in the business for so many years and are trying to be constructive and push your drag further. I just embraced it and I’ve worked on it since.

You said the reaction has been pretty positive so far, but as you know, fans can get quite passionate on Twitter… How has social media been since last night?
Absolutely, yeah. I think a piece of advice for any queen is to turn off notifications and comments and stuff like that, because there’s going to be so much shit posted everywhere. Obviously, you’ll see the odd one now and then, but this guy who works in retail and is a bit heated about everything, it doesn’t matter about what he thinks. As long as you’re happy with what you did and you understand where you went wrong, what your strengths and weaknesses are, you’ll be totally fine.

Would you come back for All Stars?
Absolutely. Not even All Stars, maybe season two! Who knows? I’ll do a Shangela and jump out of a box or something.

People might be expecting that now…
Don’t say that! Don’t put it in there!

We’d love to see it!
Yeah for sure. Since coming off the show as well, like I said, I’ve taken those critiques and I’ve really grown in drag. As you know, I was insecure about my teeth and stuff and now they’re all done. I’ve got more experience when it comes to drag, I really feel like I’ve grown, not only as a drag queen, but as a person. I have the confidence. So coming back onto the show for All Stars, I’d love to be able to represent myself to the best of my ability, rather than be a nervous wreck.

Even seeing you at our photoshoot this summer, you were much more confident.
Yeah exactly, and that was just within a few months. We’re always growing, but I feel like in these past few months I’ve really upped it up and I’m excited to show people that, even if it’s not on the show.

Who were you going to do for Snatch Game?
So I had two. I had Ozzy Osbourne and I had Nigella Lawson. Ozzy would’ve been so easy because all you’ve gotta do is mutter shit.

And Ozzy goes with your all-black aesthetic…
Exactly yeah, just need a bit of lipstick on, that’s all.

How do you think the show will change the drag scene in the UK?
Because the cast is so diverse, it shows every single orifice of UK drag. It really does represent a diverse range of drag queens that we have in the UK and it’s going to push drag even more. We’ve seen it in America, like the first few seasons aren’t as polished as what it is now… do you see what I mean? Now that you can get on Drag Race UK, people are going to put more time and effort into their drag as a result of it.

Yeah, the premiere did a fantastic job at showcasing all corners of UK drag. We had old school queens, pageant queens, quirky queens and then you provided the 2019 fashion aspect.
Absolutely, yeah. I feel like I represent myself, but also the new wave of drag in the UK.

I don’t have a clue… I love everyone?
Who do you think is the frontrunner? I’m asking you the questions now! But I like to know people’s opinions…

I’m not sure! I love all of them, there’s not one queen I dislike…
No, that’s true. It will probably happen in the next few episodes, but… Yeah, everyone’s amazing.

Are you hinting there might be – in the words of Cheryl Hole – “drama and conflama” on the way?
Of course there is! We’re a load of transvestites stuck in a room [laughs].

True. What has the best part of the experience been?
The best part for me has been being able to show myself to an international audience but also being able to grow from it as well. I’ve come so much further after hearing the critiques and evaluating my drag. I’m just really excited to see where my drag goes from here.

Will you follow in the footsteps of other legendary Drag Race queens and release a single?
Absolutely not. You do not wanna hear this boy sing. I mean, I might produce myself because I DJ and stuff, it’s in my skillset, but I’m not going to rush and do something for the sake of it to try and make some money. I wanna do something that I’m really happy with.

Would your first single have ‘chav’ in the title?
Absolutely yeah, or something to do with latex or something like that.

Drag Race UK airs every Thursday on BBC Three. The first episode is now available to stream on BBC iPlayer.

Related: 10 of the best memes from the RuPaul’s Drag Race UK premiere.