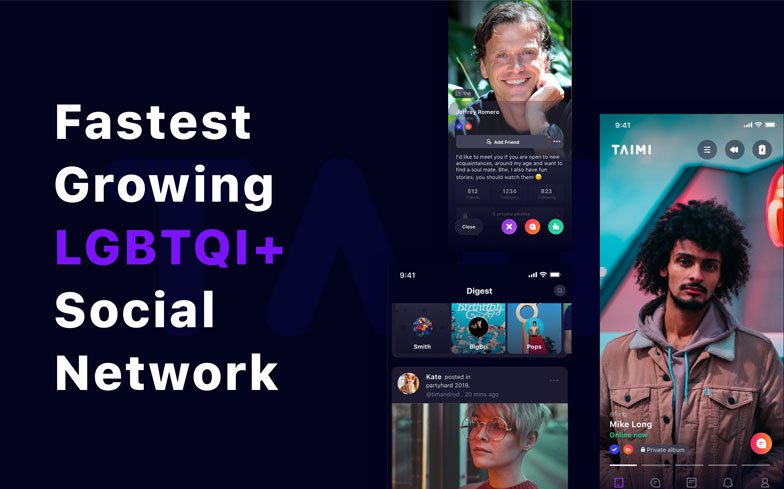 TAIMI is the only LGBTQ inclusive Social Network & Dating App with a strong social mission.

TAIMI’s major focus is on raising awareness of LGBTQ issues and promoting the message of love and equality. Despite the fact that in many countries being LGBTQ is considered safe, more than 70 states worldwide have some sort of punishment, some even enforce the death penalty.

TAIMI’s goal is to change that. In fact, the app is currently in the midst of working on several impressive multimedia campaigns, partnerships and volunteer projects aimed at changing the law and addressing discrimination on a global scale.

Recently, TAIMI partnered up with LGBTQ activists and celebrities to spread its message. One of such ambassadors is Jennifer Hopelezz who is a household name in the Netherlands. Hopelezz is a celebrity drag-queen known for her activism. She is a Pride Ambassador and an avid fighter against discrimination and injustice. One of her battles is with taxi drivers discriminating against LGBTQ passengers. Recently, thanks to her ongoing and unstoppable efforts, ride-hailing company Uber launched a special complaint category for reporting discrimination in the Netherlands. However, the fight is not limited to the Netherlands, and Jennifer is adamant about making sure LGBTQ people feel safe worldwide.

Another celebrity activist and TAIMI ambassador who is adamant about fighting prejudice and making a difference is Sisco Gomez. He is a well-known dancer & choreographer, television personality, celebrity judge on shows like The X Factor, Dancing with the Stars, and many more. Sisco Gomez is known around the world from Latin America to Eastern Europe. He is also an activist in his own right. Gomez recently launched a series of educational online videos, frequently works with LGBTQ youth in countries where homophobia persists, and actively promotes the message of love and equality in the world.

This is why it’s so crucial for TAIMI to partner up with GAY TIMES to raise its cause to another level. TAIMI is a community, a social network where people can meet, chat, video call, discuss, share content in custom groups and so much more.

At the heart of TAIMI are its core values of freedom of expression, equality and diversity. TAIMI is a safe and reliable network for people seeking connections ranging from acquaintance to romance.

The Founder of TAIMI — Alex Pasykov says the idea came after he saw the need for an app that gives people the ability to create meaningful connections rather than just hookups.

TAIMI’s key features include video calls, stories, digest, and groups. TAIMI’s users can also upload private albums that will only be seen by those they grant permission to. TAIMI also recently added Spotify Integration and TAIMI Spot which allow users to change their location during their travels.

In addition to the above features, TAIMI has a lot of major innovations coming up. The app’s users will get to experience new feeds and updated LGBTQ groups within the app. In the near future TAIMI plans to introduce features that will provide informational and educational content including event calendars, helpful tips, travel advisories and useful phrases.

To find out more about TAIMI you can visit their official website, or download the app here.