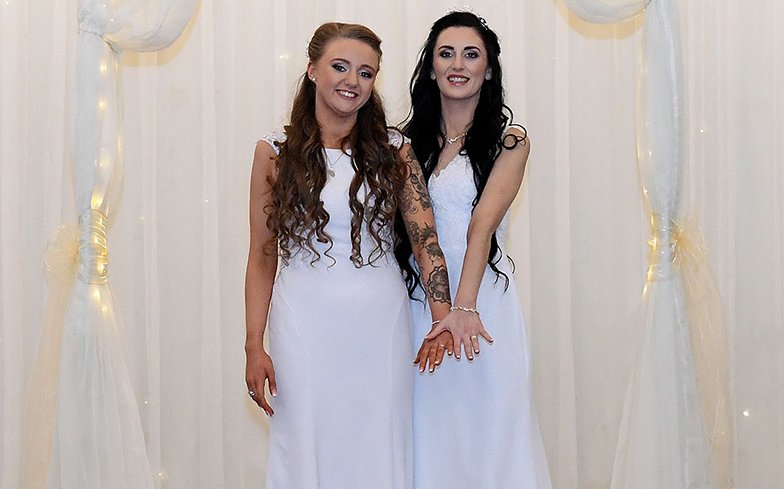 “We didn’t set out to make history – we just fell in love.”

Belfast couple Robyn Peoples, 26, and Sharni Edwards, 27, became the first same-sex couple to get married in Northern Ireland on Tuesday (11 February), following the historic change in the law last year.

The day marks their sixth anniversary as a couple. They had previously booked a civil partnership ceremony for the date prior to the law change.

Robyn said: “Our message to the world on our wedding day is: we are equal. Our love is personal, but the law which said we couldn’t marry was political. We are delighted that, with our wedding, we can now say that those days are over.

“While this campaign ends with Sharni and I saying ‘I Do’, it started with people saying ‘No’ to inequality. By standing together, we’ve made history.”

The couple made their wedding vows at 2pm at a hotel in Carrickfergus.

Sharni added: “We feel humbled that our wedding is a landmark moment for equal rights in Northern Ireland. We didn’t set out to make history – we just fell in love.

“We are so grateful to the thousands of people who marched for our freedoms, to the Love Equality campaign who led the way, and the politicians who voted to change the law.

“Without you, our wedding wouldn’t have been possible. We will be forever thankful.”

“This is a moment Northern Ireland will remember forever – this is the day love became equal in the eyes of the law,” he said.

“Robyn and Sharni’s love story has become the tale of a successful fight for equality. This is a historic occasion of which we can all be proud. As of today, Northern Ireland is a more equal, loving and happy place.”