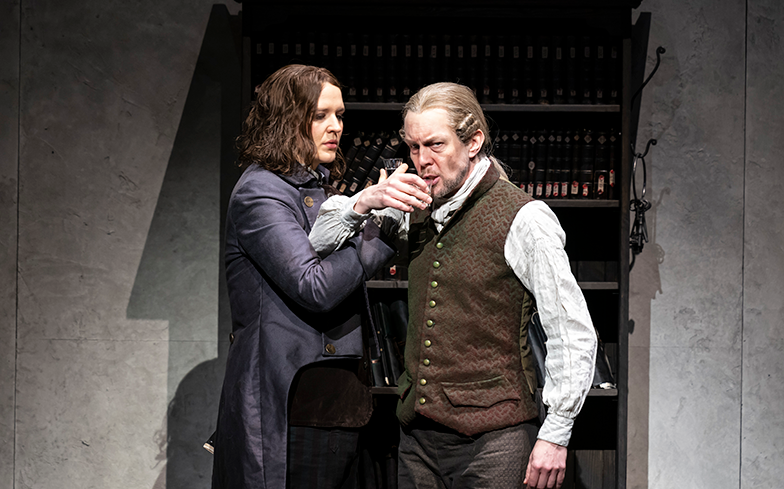 Tobias Kratzer’s new staging of Beethoven’s only opera has opened at the Royal Opera House.

For those unfamiliar, Fidelio tells a bit of a convoluted tale. Early on we are introduced to Marzelline, who is daughter of the local gaoler Rocco. She has fallen for her father’s handsome young assistant Fidelio. Unbeknown to either father or daughter is that Fidelio is actually a woman, Leonore, in disguise. Leonore has taken the job of gaoler’s assistant as she believes her husband is being held captive there. Cue her attempts to visit and hopefully free the political prisoner, with the dream of being reunited with her husband.

Before the curtain is lifted, we receive a warning that Jonas Kaufmann – who is playing imprisoned husband Florestan – is under the weather, but has decided to soldier on and sing during this press performance. Credit where it’s due he copes admirably, but stealing the show is soprano Lise Davidsen as Leonore. Displaying expert control, the role is a real showcase for her voice which manages to be both impressively powerful yet beautifully resonant – hers is a truly exceptional performance. The orchestra – under the guidance of conductor Antonio Pappano – sounds wonderful, too.

So we’ve established that musically this is a magnificent production, but sadly it’s theatrically frustrating. Most notably it’s a show very much of two halves, which can’t quite decide what it wants to be. Act one a period piece, set in revolution-era France with a traditional look and feel. Act two almost entirely abandons this, unfolding on a more modern-looking set in front of an on-stage audience of spectators in modern dress. We didn’t feel as though the two concepts sit all that well next to each other, while the new dialogue that has been inserted seems a bit clunky on occasion.

It’s disappointing as there are lots of good ideas in here and the performances are strong. While we didn’t really buy into the staging of this opera, many of the scenes are still aesthetically pleasing. Those purchasing tickets will absolutely be in for an audio treat – especially thanks to Lise Davidsen’s frankly remarkable performance – but sadly the theatrical elements of the show never quite deliver satisfactorily.