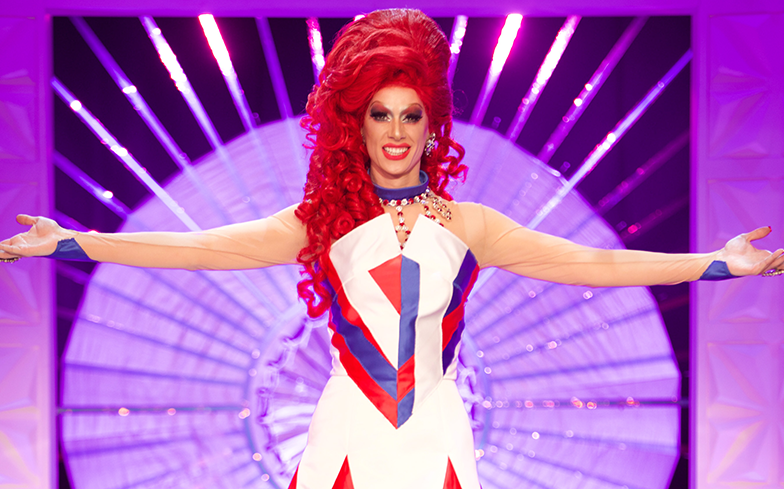 “It’s important that on a show that is seen by so many gay folk, that those conversations are happening, to show that there are other ways of existing.”

The Drag Race UK star sat down with GAY TIMES this week on Instagram Live for the latest instalment of #Undistanced, our brand new online content initiative designed to entertain and educate our followers during the coronavirus lockdown.

Divina discussed her thoughts on Snatch Game, what it was like for herself to participate in the show’s staple maxi-challenge, and more importantly, the impact Gigi’s revelation will have on not just the queer community, but everyone tuning in.

“That’s what we need to be pushing a little bit more, more people who are not conventional,” she told us. “So few of us sit in those boxes. There is a trap, a prison that society has created to make us behave in particular ways.

“I think the more people talk about it, the more they understand it. The less people equate with those boxes, the less they go, ‘Oh, so just because I have this particular piece of anatomy, I don’t to behave in that way.’

“Suddenly, the whole world opens up and you go, ‘Actually, that’s not how I feel about my experiences as a person at all.’”

The moment was also important because of the “misunderstanding in the gay community,” according to Divina.

“It’s important that on a show that is seen by so many gay folk, that those conversations are happening, to show that there are other ways of existing,” she added. “It doesn’t matter if you understand it or not, you just don’t have to be a little bitch about it.”

The legendary performer came out as non-binary last year ahead of her debut on Drag Race UK.

“I’m just a person. You can use he, she, they, them,” she tweeted. “What you see or think isn’t always the same as how I experience the world. How I present to you doesn’t necessarily reflect my reality. That’s not the case for everyone.

“If it does upset someone to be misgendered then don’t be a dick. It’s a pretty simple rule for life. We can be kind.”

When Gigi came out as gender fluid, she admitted in her confessional that she’s “always teetered between male and female throughout my whole life. I think I really always carry some sense of female and male, even when I’m in non-drag.”

She explained further: “Growing up, I’ve always been interested in feminine things. I wanted to wear dresses to school. I’ve always thought there was no point to putting a label on anything in regards to gender.

Her coming out was met with a highly positive reception from fans. One tweeted that it was “the EXACT thing I needed right now” while another said that having gender fluid representation on television made them “emotional”.

Yes, we love to gag over the lip syncs, runways, challenges and merchandise-able catchphrases, but what truly grounds the show is when we can connect to the queens and their real life experiences as queer people.

On this week’s episode of Drag Race, the queens will follow in the footsteps of The Unauthorised Rusical’s of Cher, Donald Trump and Kardashians by telling the story of Madonna. Winnie Harlow and Alexandra Ocasio-Cortez will guest judge.

All six episodes of RuPaul’s Drag Race season 12 are available to stream now on Netflix UK – watch the preview below.