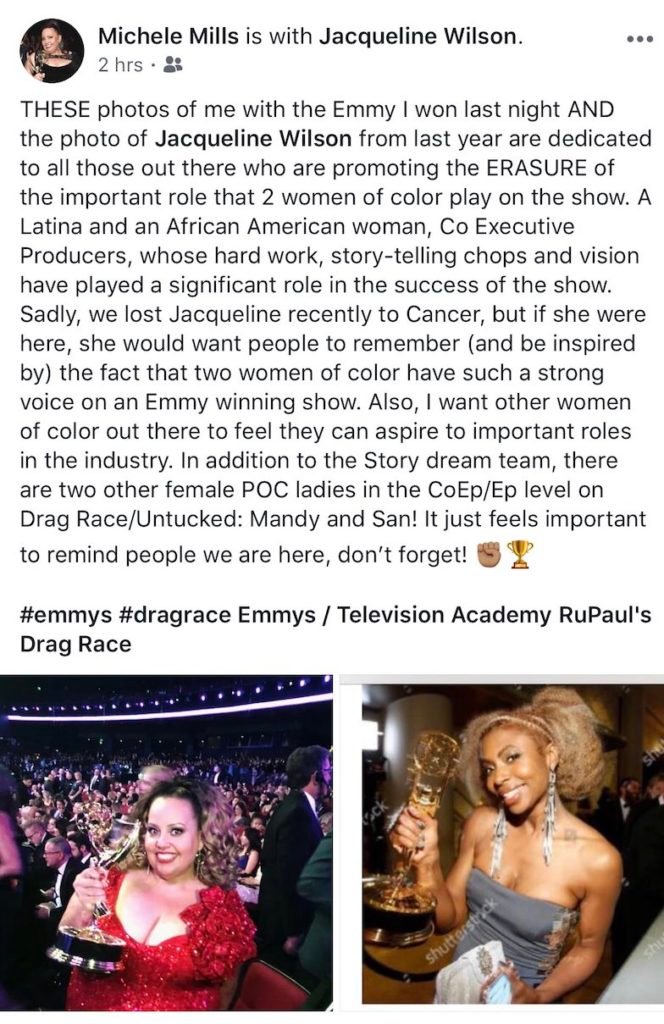 “If you are participating in a narrative that says “there are no people of color” you are engaging in erasure.”

Bob the Drag Queen and Monét X Change have defended RuPaul’s Drag Race from claims that the show lacks ‘diversity’.

After the series won its second consecutive trophy for Outstanding Competition Program at the 71st Primetime Emmy Awards, RuPaul was awkwardly questioned by a reporter about the “many white men behind Ru in the press room”.

“I have a question about the hot-button term diversity that always gets thrown around. We’re looking at your team and I don’t see a lot of diversity,” said Danielle Young of Essence.

“I’m curious about how you feel, especially as someone who represents so strongly for the LGBT+ community. Do you feel like it’s important for that to be represented behind the scenes as well?”

RuPaul responded: “And the BLT community, I love myself from bacon, lettuce, tomato. First of all, the host of our show is black, gay and a drag queen, so check, check and check. But we’re pretty diverse, there are lots of different types of people here.

“But is it important? Absolutely. When I grew up, I had to fight, like… I feel like I’m about to quote a movie right now, but it wasn’t easy. You know what I had to do? Some of the things, I’m not even going to repeat what I had to do!”

Shortly after on Twitter, Young said she pressed RuPaul on the issue because the show “centers diversity and the staff seemingly doesn’t”, adding: “As a journalist, I wanted to give him the space to address that.”

Yesterday, season eight winner Bob took to Twitter to say there are “several people of colour” working on Drag Race.

“Plus 74% of the cast. The truth is the truth no matter who knows it and a lot if them identify as women. Just saying. So if you are participating in a narrative that says “there are no people of color” you are engaging in erasure.”

Mills also voiced her frustrations at the reporter’s comments on Facebook, dedicating the award to Wilson and “to all those out there who are promoting the ERASURE of the important role that two women of colour play on the show”.

“Sadly, we lost Jacqueline recently to cancer, but if she were here, she would want people to remember (and be inspired by) the fact that two women of colour have such a strong voice on an Emmy winning show,” she wrote.

“Also, I want other women of colour out there to feel they can inspire important roles in the industry.”

AS4 champion Monét reposted Mills’ message on Twitter and honoured the women on the camera crew and the women of colour behind the scenes who take care of the contestants while the show is filming.

“I get so annoyed by this stuff because I am so proud to be a part of the LEGACY of RPDR,” she told her followers. “A show that tells the story of so many queer people/POC. Never in the history of television (now, POSE) had we EVER seen this before.”

Bob later explained that she’s been on the set of several television shows and films, and said there’s only been two productions that have had more diversity than Drag Race: Cherry Pop and Black Lady Sketch.

She also criticised the “fake ass narrative” of Billy Porter’s supposed shade of RuPaul during the Emmys. “Pitting two black queer men against each other,” she said. “Y’all really out he trying to start gay mandingo fights. Now I’m really done.”

The post Bob and Monét defend Drag Race after reporter calls out ‘lack of diversity’ appeared first on Gay Times.