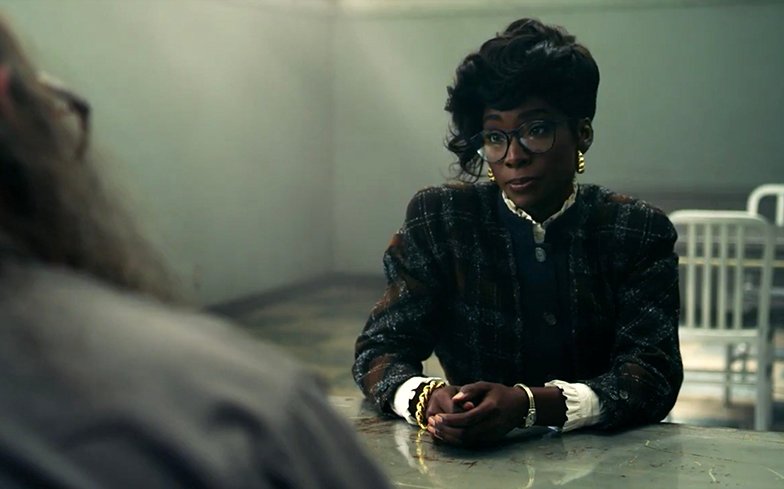 American Horror Story truly is the gift that keeps on giving.

1984 follows five teenagers who become camp counsellors for the summer to escape the wrath of a Los Angeles serial killer called The Night Stalker – only to end up faced with Mr Jingles, who slaughtered nine people at the camp 14 years prior.

After just one episode, fans (including us) had come up with a number of theories – some plausible, some slightly more imaginative – about who the real mastermind behind the killings could be, but it turns out they were all wrong.

In this week’s third episode of American Horror Story: 1984, the brilliantly-titled Slashdance, viewers were treated to a number of flashbacks that revealed some game-changing details.

In a scene set one week prior, Rita paid a visit to the mental hospital Mr Jingles (John Carroll Lynch) was housed in. She claimed to be a doctoral student called Donna Chambers who managed to get several serial killers to open up about their motives.

Granted time with Mr Jingles, Rita told him she believes he’s not evil and that his time in the Vietnam war (or maybe pornography) is responsible for his murderous past – which he interestingly says he can’t remember.

Rita convinced Jingles to break out of the hospital and return to Camp Redwood so she could study him in his natural habitat and attempt to figure out why he turned to murder. Her hope is that she can prevent others from becoming serial killers.

With Jingles on board with the plan, Rita followed the real nurse Rita (Dreama Walker) to Camp Redwood and kidnapped her, stealing her uniform and car so she could take on her identity and have a reason to be at the camp.

While her plan may seem well-intentioned, releasing Jingles has already led to several murders, and when we last saw her she was preventing Brooke from escaping by injecting her with horse tranquilliser. At this point, we don’t know what her true intentions are.

The second massive twist came in the episode’s final moments, as Montana (Billie Lourd) was left alone to fend for herself when serial killer number two, the Richard Ramirez aka The Night Stalker (Zack Villa), turned up to attack her.

Just when it seemed Montana had met her end, she planted a kiss on her would-be killer, before asking: “Why the hell haven’t you killed her yet?”

Who is Montana referring to? We’d assume it’s Brooke, as she’s the one Richard has been stalking since episode one, but at this point we’ve got no idea what the show is going to throw our way.

As well as unexpected twists, the episode also featured the highest non-flashback death count of the season so far, including a number of Mr Jingles impersonators and the real nurse Rita, who met her doom in one of the most shocking murder scenes so far.

This season’s first major character was also killed, as Ray Powell (DeRon Horton) got his head chopped clean off by Mr Jingles while trying to escape the camp. We’d feel bad, but he did just leave several of his friends to die.

American Horror Story airs Thursdays at 10pm on FOX in the UK. You can also catch up on NOW TV.