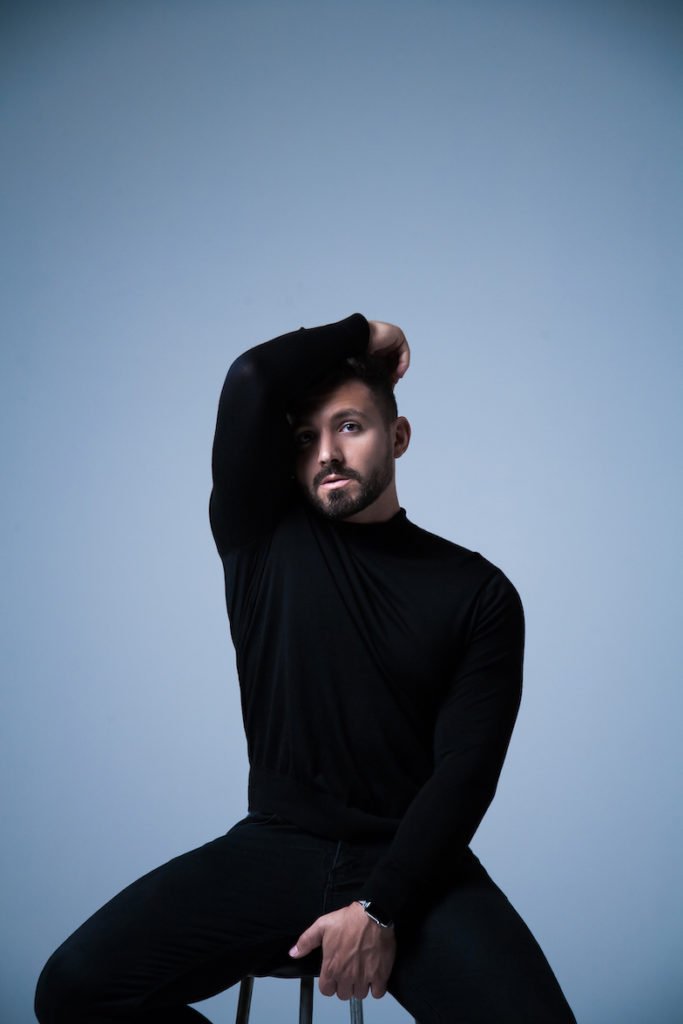 “I think it is incredibly important for us to be visible as role models for young people and to remind them how beautiful they are just being themselves.”

Earlier this year, Australian singer-songwriter – and winner of The Voice 2016 – Alfie Arcuri made his music industry comeback with To Myself, a heartbreaking piano ballad that doubled as his entry for the Eurovision Song Contest.

Although he didn’t get to represent his country in the competition, Alfie has gained a legion of new fans with his latest material, especially with his stunning synthpop number Same, in which uses he/him pronouns.

“Recently someone commented on the song saying, “I’ve been rewriting love songs in my head for years in order to relate – this needs no re-writing,”” he tells us. “This made me realise that I am finally on the right path with what I am doing.”

We caught up with the star and discussed life since his win on The Voice and why it’s important for him to be a visible queer role model in our current political climate.

How has life been for you since winning The Voice?
My life has changed completely. Before The Voice, I held a regular 9-5 job as an architect in an office and my life was becoming a little too routine and structured. Now my life is constantly changing and there is always something exciting happening! I’m literally on the plane home from Romania where I took part and performed in front of thousands at an outdoor music festival and earlier this year a performance brought me to an amazing stage in New Zealand. I’m very grateful for the opportunities that have come from The Voice but the journey and transition into the music industry has also had it’s share of incredible challenges, as you can imagine!

You returned to the industry earlier this year after a two-year break with To Myself – why did you choose that song in particular for your comeback?
To be honest, To Myself was kind of a beautiful accident. I had everything lined up for the release of my current single Same. Then an opportunity knocked on the door for the first Eurovision: Australia Decides show. I submitted a couple of songs as a songwriter initially and the one the panel selected – for another singer at the time – was To Myself. At first, I was a little sad that I wasn’t going to perform the song myself as it was such a personal song; I had written it as a letter to my younger teenage self when I was struggling with my sexuality. But then, as the universe intended, I received a call from the network asking me to be a part of the broadcast and to perform the song myself.

Same sounds very personal – what’s the story behind the song?
I find songwriting so cathartic and writing this song helped me understand the downfall of a couple of my previous relationships. The story is basically about when you come across somebody who has all the same things as the person you lost except for the fact that it’s just not them. Some loves just can’t be replaced, no matter how hard you try. It’s pretty simple thematically but a powerful story and message that I think a lot of people have experienced and can relate to.

In the song you say ‘he’ – is it important for you, as an LGBTQ artist, to use he/him pronouns?
Yes! Not only is it important, it is so empowering. Recently someone commented on the song saying, “I’ve been rewriting love songs in my head for years in order to relate – this needs no re-writing.” This made me realise that I am finally on the right path with what I am doing.

Is it important for you to be as visible as possible, especially in our current political climate?
I think it is! Particularly with a lot of the current discussions on religious freedom and homosexuality in schools. I think it is incredibly important for us to be visible as role models for young people and to remind them how beautiful they are just being themselves.

It’s been three years since you released your debut album – when can we expect the follow-up?
Very soon. I have so many more stories to tell!

How are you navigating the music industry in the streaming age?
I guess I didn’t know any different. I became a part of the industry during the streaming age but I guess in the last few years it has grown and evolved. I find streaming quite exciting. I love logging on to my Spotify artist page to see how my songs are trending and to see where in the world people are listening and connecting to my music. I guess 10-20 years ago when people were still buying singles, music wasn’t as accessible internationally and it was harder to get such a broad reach. Now music is limitless in that regard – as it should be!

Australia just passed marriage equality in 2017. Did it shock you how much homophobia came out around the debate of gay marriage?
Yes, it did and it saddened me. I think I had sheltered myself from homophobia. I also have an amazing network of family and friends who also sheltered me from that stuff. It wasn’t until one of the rallies that I sung at where I was faced with protests. I felt very isolated and vulnerable in that moment and it reminded me that sadly it still exists.

Has the homophobia died down since the debate, or are there still quite a lot of opposers?
Yes I believe it had died down – until recently as there has been a lot of discussion about religious freedom in Australia, which has in turn created a resurfacing and forum of discussion surrounding homosexuality again here.

You represented Australia at the Golden Stag Festival – how was that experience?
I had the most amazing time representing Australia! It was one of the most difficult and simultaneously rewarding experiences I’ve had so far as a singer because one of the requirements of the festival was to sing a Romanian song in their language. I can barely speak English well at the best of times [laughs]. But after six lessons, I managed to memorise the song phonetically and I was pretty proud of my performance in the end. You can check it out on YouTube…

The post Alfie Arcuri on the importance of using gender specific pronouns in his songwriting appeared first on Gay Times.