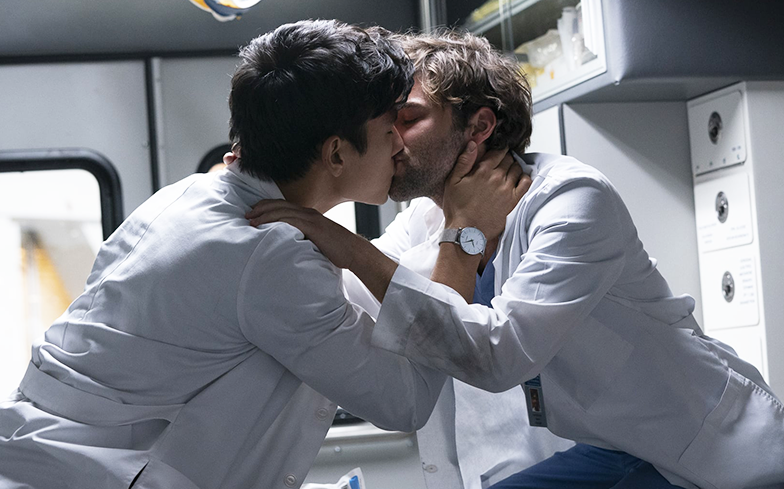 The coronavirus has put the entertainment industry on pause.

As of writing (3 April), there are over one million confirmed cases of the global pandemic and over 54,000 deaths. To prevent the spread of the virus, several television shows, films, tours and music releases have been cancelled or postponed.

Lady Gaga’s sixth studio album Chromatica has been delayed until further notice, as well as the release of The New Mutants – the first Marvel film to feature a same-sex romance – and production on RuPaul’s Drag Race UK season 2 has been halted.

Sadly, over 100 Pride events around the world have also been cancelled, which means we’ll miss out on Mariah Carey’s debut at this year’s Brighton Pride Festival, as well as Cheryl and Kelly Rowland’s headline performances in Birmingham.

We’ve rounded up all the LGBTQ-related events and releases that have been affected due to the coronavirus pandemic (so far).

Grey-Sloan Memorial Hospital is shutting its doors sooner than expected this season. Back in March, it was announced that the Emmy-winning medical drama had suspended filming for two weeks, and would not be resuming production for the rest of the season; meaning season 16 will be cut shorter than expected. The finale was originally set to air on 16 May, but will now air its last-produced episode as the season finale. ‘Put on a Happy Place’ will premiere 9 April and will be the end of Grey’s Anatomy for the foreseeable future. Krista Vernoff, showrunner, said on Twitter that she’s “disappointed that we don’t get to complete our storytelling” but assured fans the episode will “play like a satisfying finale”. She added: “It’s not where we planned to end, but it’s beautiful & the questions that linger we will answer next year.”

The fourth season of Riverdale was halted last month after a crew member was suspected of having the coronavirus. A representative told CNN: “We have been made aware that a team member from Riverdale, which is produced in Vancouver, was recently in contact with a person who has tested positive for COVID-19. The team member is currently receiving medical evaluation. The health and safety of our employees, casts and crews is always our top priority. We have and will continue to take precautions to protect everyone who works on our productions around the world. Out of an abundance of caution, production on Riverdale is currently suspended.”

In March, it was announced that the highly-anticipated second season of RuPaul’s Drag Race UK had been put on pause, with a spokesperson telling Digital Spy: “In light of the spread of Covid-19, after much consideration, production on RuPaul’s Drag Race UK will be temporarily pausing filming both in consultation with and supported by the BBC. We will continue to review all productions on a case by case basis and will continue to follow the latest news and advice from the Foreign Office, World Health Organisation and Public Health England.”

The latest instalment of The X-Men film series, and the first Marvel film to reportedly feature a same-sex romance, The New Mutants was once again delayed earlier this year alongside other blockbuster films such as Black Widow, Wonder Woman and Mulan. Disney’s executive chairman Bob Iger told shareholders in a meeting on 11 March that “it’s fair to say we’re all sobered by the concern that we feel for everyone affected by this global crisis, these are challenging times for everyone.” He added: “What we’ve demonstrated over the years is that we’re incredibly resilient. If you think about the world today, what we create has never been more necessary or more important.” Disney still intend to release the film this year.

Gay Times cover star Greyson Chance postponed his upcoming European tour last month to ensure the “the safety of me, for my crew, and ultimately for the safety of you all coming to the show.” He said over social media: “If you know me, you know that this was an incredibly hard decision to make. Rescheduling shows is the last thing I want to do. However, the silver lining is that as we were designing this show, it was looking like I was going to play a few new songs from the new album, but by postponing this tour, we will now be able to play the entire new album in full and do it in the most proper way.”

The brand spanking new production of Werq the World was originally set to return this summer and star Drag Race legends Asia O’Hara, Detox, Kameron Michaels, Plastique Tiara, Shea Couleé, Vanessa Vanjie Mateo, The Vivienne and Yvie Oddly as they journey through iconic periods of time – with the help of legendary guest judge Michelle Visage. Unfortunately, the queens will now be sashaying to a new date, which is yet to be confirmed.

Rina Sawayama’s upcoming Dynasty Tour has been rescheduled to September in the UK, with further dates to be announced for the US. “I hope you can still make it – your original tickets will still be valid for all rescheduled dates,” she wrote in a statement. “I can’t wait to see you!” The tour was to support the star’s highly-anticipated debut album, SAWAYAMA, which is due for release 17 April. It will include the nu-metal banger STFU!, pulsating club track Comme Des Garçons (Like The Boys), the 00-inspired R&B number XS and the future queer anthem, Chosen Family. At least we’ll have that to tide us over.

Gender fluid pop star Dorian Electra was set to embark on their biggest ever headline tour later this year across America and Europe, with UK stops in London, Manchester and Brighton, in support of the extended version of their critically-acclaimed debut album Flamboyant. Unfortunately, the North American dates have postponed until further notice. “In order to help slow the spread of COVID-19 it is absolutely necessary that we take it upon ourselves to cancel all non-essential events and public gatherings,” they wrote. “This for the health and safety of everybody.” Dorian continued to say they will be “working on lots of new music and new music videos and other special things.”

Lady Gaga delayed the release of her sixth studio album Chromatica, which was due out 10 April. In a lengthy post on Instagram, the pop superstar detailed her reasoning for the decision, explaining that with the coronavirus pandemic affecting people around the world it didn’t feel like the correct time for her to release a new album. “I wanted to tell you, that after a lot of deliberation, I’ve made the incredibly tough decision to postpone the release of Chromatica. I will announce a new 2020 release date soon,” she wrote. “This is such a hectic and scary time for all of us, and while I believe art is one of the strongest things we have to provide joy and healing to each other during times like this, it just doesn’t feel right to me to release this album with all that is going on during this global pandemic.”

Sam Smith – To Die For

In March, Sam Smith postponed their debut studio album, which was originally titled To Die For after the single of the same name. “Firstly I want to send love and strength to everyone who has been affected by this situation,” they wrote in an official statement on social media. “I hope you are all alright during this incredibly weird, upsetting and unprecedented time. I have done a lot of thinking the last few weeks and feel that the title of my album and imminent release doesn’t feel right, so I have come to the decision to continue working on the album and make some important changes and additions.” Sam then confirmed that they will be changing the title and pushing back the release date, but told fans not to worry because the album will definitely be released this year – with more singles to follow in the coming months.

The rapid escalation of the coronavirus pandemic has led to the cancellation of nearly 100 Pride events around the world, including London Pride, UK Black Pride, Brighton Pride, Manchester Pride and Birmingham Pride. Kristine Garina, president of the European Pride Organisers Association, said in a statement: “Prides cancelling or postponing because of COVID19 has reached 100, and it’s very clear that this pandemic is going to have a huge impact on our movement. Right now we must all be focusing first on our own wellbeing and the welfare of those around us, but we are passionate about Pride and we will work together, and do all we can, to help Pride organisers get through this.” Garina went on to assure that Pride celebrations will continue to “change many more lives in the future.”

This year’s Coachella Festival was set to include some incredible queer talent from the likes of Pabllo Vittar, Frank Ocean, Girl in Red, Lady Gaga, Kim Petras, Lil Nas X and Orville Peck, as well as LGBTQ favourites such as Carly Rae Jepsen, Charli XCX, Conan Gray, Doja Cat and Lana Del Rey. Sadly, the event – which was due to take place in April – has been rescheduled for October. “While this decision comes at a time of universal uncertainty, we take the safety and health of our guests, staff and community very seriously,” said a statement posted on Coachella’s official Twitter page. “We urge everyone to follow the guidelines and protocols put forth by public health officials.” All purchased tickets will be honoured for the rescheduled dates in October.

In March, Eurovision was cancelled for the first time in its 64-year history. A statement posted on Eurovision’s official Twitter account read: “Over the past few weeks we have explored many alternative options to allow the Eurovision Song Contest to go ahead. However, the uncertainty created by the spread of COVID-19 throughout Europe – and the restrictions put in place by the governments of the participating broadcasters and the Dutch authorities – means the European Broadcasting Union (EBU) has taken the difficult decision that it is impossible to continue with the live event as planned. Jon Ola Sand, the event’s executive supervisor, added: “The EBU, together with the Host Broadcaster NPO, NOS, AVROTROS and the City of Rotterdam will continue to talk to see if it’s possible to stage the Eurovision Song Contest in Rotterdam in 2021.” Sand continued to “thank everyone who has been involved in the process of staging a great Eurovision Song Contest this year,” before assuring fans that the Eurovision Song Contest will “come back stronger than ever” next year.

The post A list of LGBTQ shows, films, tours and music releases affected by the coronavirus appeared first on Gay Times.