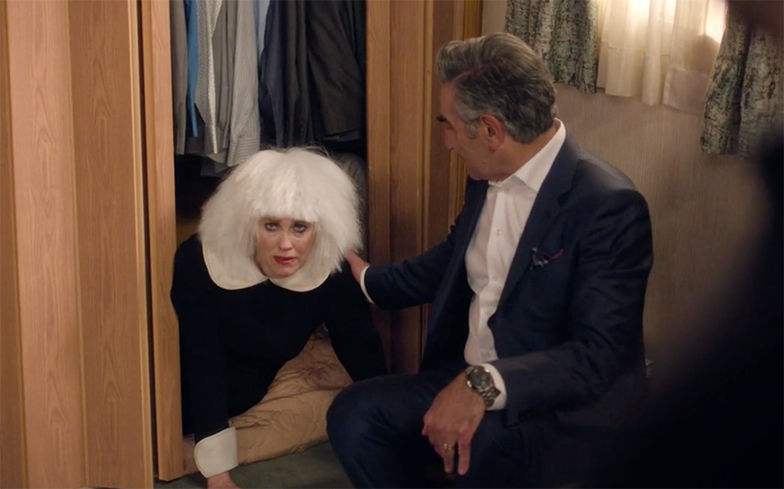 “Sadly, I won’t be able to squire you for today’s wedding venue peregrination.”

After eight months of rewatching Moira Rose say “bébé” and campaigning for A Little Bit Alexis to earn Record of the Year at the 2020 Grammy’s, this week finally saw the return of critically-acclaimed Canadian comedy, Schitt’s Creek.

To the surprise of no one, the premiere was perfect. The core four, Catherine O’Hara, Eugene Levy, Dan Levy and Annie Murphy were on top form for their final outing as the Rose family, but we will admit: this episode belonged to Moira.

As the eccentric family matriarch and star of Sunrise Bay and The Crows Have Eyes 3, O’Hara provided fans with one of her most breathtakingly exquisite wigs to date and phrases that will inevitably make the rounds on Gay Twitter.

We rounded up six of the best Moira Rose quotes from the season six premiere of Schitt’s Creek – see below.

1. “Sadly, I won’t be able to squire you for today’s wedding venue peregrination.”

2. “Wait! My bebe’s, my girls! Lorna: second from the left, if she takes on smoke she’ll never recover – and Cindy! I just gave her a blowout!”

3. “How mercurial is life… We all imagine being carried from the ashes by the goddess Artemis and here I get a balatron from Barnum & Bailey.”

3. “Who knows what will befall us tomorrow John? You could be hit by a mack truck or bopped on the head by a tiny piece of space debris.”

4. “Thank you officer for your almost militant commitment to the protection of our community. I promise to keep my husband habilimented from now on.”

5. “It sounds to me like you two dodged a bacon-wrapped bullet. I’ll say it again: life is but a strand of happy accidents.”

Although Schitt’s Creek is currently at its peak, both critically and commercially, co-creators Dan Levy and Eugene Levy announced last year that they were ending the show with season six.

“We are so grateful to have been given the time and creative freedom to tell this story in its totality, concluding with a final chapter that we have envisioned from the very beginning,” they wrote in a joint statement.

“It’s not lost on us what a rare privilege it is in this industry to get to decide when your show should take its final bow. We could never have dreamed that our fans would grow to love and care about these characters in the ways that you have.

Related: Catherine O’Hara reveals the queer Schitt’s Creek scene that makes her ‘cry so much’.

“We are all so excited to begin shooting these last fourteen episodes and can’t thank you enough for the overwhelming love and generosity you’ve shown us. We hope you continue to enjoy the rest of our fifth season as we prepare to shoot our sixth!”

Since its premiere in 2015, Schitt’s Creek has received universal acclaim from critics and has been lauded for its portrayal of its LGBTQ characters especially Dan’s character David Rose, who identifies as pansexual.

Schitt’s Creek airs every Tuesday on Pop TV – watch the hilarious trailer below.