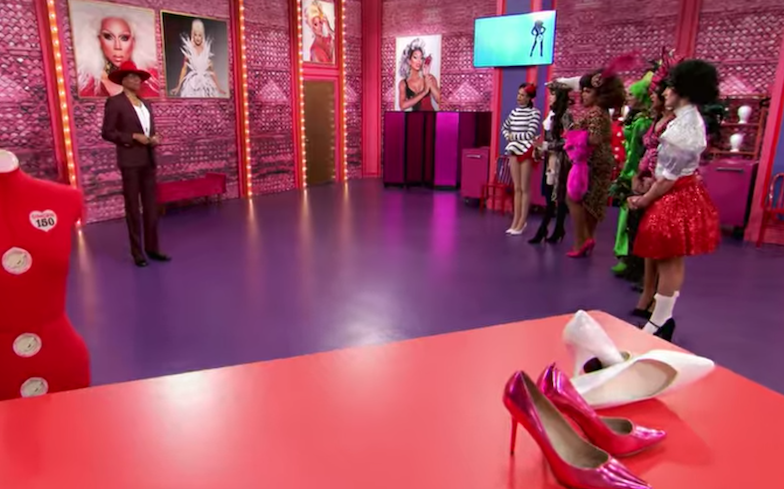 This was one of the best premieres in years.

The US version of RuPaul’s Drag Race (aka the original) had a lot to live up to after the high acclaim of its crass and deadpan British counterpart, which has been credited with reinvigorating the franchise and catapulting it to new heights.

Did the season 12 premiere provide us with what we needed? Did it leave us… gagging (so)?

If you’re reading this, then you read the above section in bold that clearly states this was one of the best premieres in years, so it comes as no surprise that we were living for everything in this introductory episode.

We’ve rounded up five of the most gag-worthy moments from the Drag Race season 12 premiere – get your jush below.

Oh, and SPOILERS – if you didn’t have the common sense to know.

Taking inspiration from season six, aka one of the most beloved and critically-acclaimed seasons in Drag Race HERstory, the season 12 premiere introduced us to only half the talent: Brita, Nicky Doll, Chrystal Meythd, Gigi Goode, Widow Von’Du, Heidi N Closet and Jackie Cox. It was a shock (to those who hadn’t read the GAY TIMES article that was reported last week, yep we pluggin’), because it was only the second time it’s ever been done, but it’s a fantastic move on the show’s part because we get to spend more time knowing each queen.

After they sashayed down a fashion-themed runway for RuPaul, Michelle Visage, Carson Kressly and the real Kanye West and Kim Kardashian in a fall and spring lewk, the queens were tasked with introducing themselves to audiences with their own rap verse on RuPaul’s new Read U Wrote U-inspired bitch track, I’m That Bitch. Honestly, each queen served C.U.N.T and although they had issues in rehearsal, the choreography was jaw-dropping. The queens of Drag Race season 12 did not come to play, they came to – in the words of future All Stars winner Shea Coulee – “slay”.

“If he could a real big d, he could hurt me”

During deliberations, Ru tasked special guest star Nicki Minaj with writing her own verse for I’m That Bitch, and whew lordt, it proved why she’s the supreme rap goddess of our mothertucking time ARE WE RIGHT BARBS? Nicki Minaj may not be a contestant on this series (although she has what it takes to be crowned America’s Next Drag Superstar), but she won this challenge, and she’s certainly going to be remembered as one of the best judges in Drag Race HERstory.

After Ru announced that Brita, Nicky, Chrystal, Heidi and Jackie were safe, we, and every Drag Race fan around the world, let out a Joslyn Fox-esque gasp. Widow and Gigi received unanimous praise for their runways and performance, so surely not? Surely they wouldn’t be lip syncing for their life? Because this is Drag Race, and because this is RuPaul, it wasn’t as straightforward. Now, taking inspiration from All Stars, Ru revealed that the top two queens would be lip syncing to win the episode -and a cash tip of five thousand dollahz. Gag.

STARSHIPS WERE MEANT TO FUCKING FLY

To the tune of Starships, Gigi and Widow channelled Dusty Ray Bottoms and Monét X Change to provide us with two completely different interpretations of a Nicki Minaj dance-pop anthem. Gigi brought comedy, whereas Widow blessed us with splits, kicks, flips whilst channelling her inner praying mantis (watch above and you’ll see what we mean). It was just perfection, and set the tone for, what is hopefully going to be, one of the best seasons of Drag Race in years. Everything about this episode was perfection.

The season 12 premiere of RuPaul’s Drag Race is available to stream now on Netflix UK.

The post 5 most gag-worthy moments from the Drag Race season 12 premiere appeared first on Gay Times.