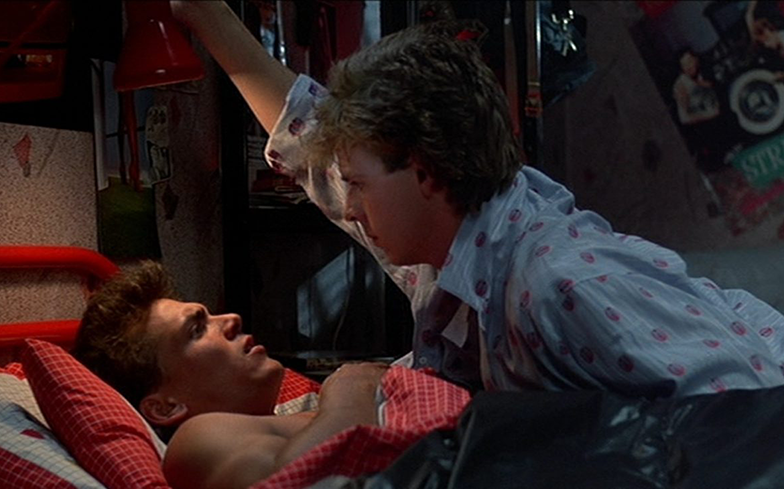 In the mood for a gay romance with two hunky protagonists stalked by a deranged madman? Or do you fancy a brutal lesbian French horror? Maybe an iconic cult classic with a self-proclaimed “sweet transvestite from Transsexual, Transylvania”?

If you’re not planning on dressing up as a mouse (duh) or Grammy Award winning singer-songwriter Ally Campana-Maine from A Star Is Born this Halloween, then you need to check out our collection of queer LGBTQ horrors and thrillers. See below…

Despite not featuring any openly gay characters, Freddy’s Revenge is one of the campest horror films in history; featuring scenes in leather bars, locker rooms and sweaty shirtless men trying to escape the wrath of Freddy’s perfectly manicured talons. Although it received mixed reviews upon release, the film has become a cult classic and has become a Halloween go-to for the LGBTQ community.

Gay couple Marc and Fred (Bateman and Teale) embark on a weekend getaway to a bed and breakfast. They were turned away by the religious owner a year prior, sued for discrimination and won their case, so they’ve returned (for some weird reason) to embark on the romantic retreat they never had. However, their break is interrupted when a sinister stranger shows up…

The Craft follows a group of four outcasts teenage girls with supernatural abilities. They pursue witchcraft for their own personal gain and face massive consequences, leading to a terrifying finale between the two main characters, Rachel (Tunney) and Nancy (Balk). Even though the film isn’t explicitly queer, it has undertones. Their coven feels like a group of LGBTQ youth who are coming to terms with their identity. Nancy, is your typical unapologetic “out” character, Bonnie doesn’t want to cause trouble and wants to be left alone, Rochelle is bullied by the other kids for her skin colour, and Rachel doesn’t fully understand her identity yet. In the film, they even go to a witchy part of town which they deem their “safe space”, which we can all relate to.

This underrated slasher flick follows a serial killer on a mission to butcher the entire gay community. Bit dramatic, but his main targets are gay men, so… It first premiered during gay and lesbian film festivals in 2004 and 2005 and has been credited with sparking a wave of “gay slasher” films. For those who love a good slasher movie with a “whodunnit” storyline, you’ll love Hellbent. The characters are fleshed out, the killer is terrifying, and the suspense… THE SUSPENSE! Ooh lord.

This may be one of the most terrifying and clever horror films we’ve ever seen. High Tension follows a young woman who travels to her best friend’s home – which is in the middle of nowhere (classic) – for a weekend getaway. Soon after, a serial killer wakes them up in the night, butchers the family and kidnaps her best friend. Because she’s completely in love with her, she tries to track them down. There are some scenes which are, to be honest, hard to watch. However, all is not how it seems… We highly recommend.

Despite being a box office disappointment, Jennifer’s Body has become somewhat of a cult classic. The film stars Megan Fox as a popular girl at high school who becomes possessed by a succubus – a demon who seduces men, kills them and devours their flesh etc. There’s a same-sex moment in the film when Jennifer and Needy (Seyfried), her bff, share a kiss, and their sexual tension is pretty much alluded to all throughout the film. Megan Fox (sorta) confirmed her character’s sexuality in a 2009 interview with The New York Times, describing Jennifer as a “cannibalistic lesbian cheerleader”.

Gaby Hoffman of Transparent fame stars as Leah, an expecting mother who moves into a Brooklyn townhouse with her partner June (Jungermann) and their toddler, Lyle. A tragic, unexplained accident results in Lyle’s death, which leaves Leah grief-stricken and paranoid that her neighbours are involved in a satanic cult.

Get Out star Allison Williams returns to the horror genre as the talented but troubled cellist, Charlotte, who travels to Shanghai to reconnect with her former mentor Anton (Weber), who’s running a cello competition alongside his wife Paloma (Huffman). There, she meets another of Anton’s students Lizzie (Browning), and the two quickly become friends. Shortly after their relationships turns sexual, Charlotte agrees to accompany Lizzie across rural China. Sounds lovely right? Nah, what follows is pure terror. If you’re squeamish, don’t watch. If you’re not, enjoy!

Hunter Killian (Raetz) returns home to Michigan with the support of his friends in NYC to come out as gay to his disapproving conservative father. It quickly turns from a coming-of-age drama into a full-blown slasher flick when the gang become hunted by a deranged, pitchfork-wielding lunatic with mummy issues. It’s gory, raunchy and it’s full of twists and turns.

Does this even need a bio? For those who haven’t seen, The Rocky Horror Picture Show tells the story of a young couple whose car breaks down near a castle, which is habited by group of strangers in faaaabulous costumes who are celebrating an annual convention. Their leader, Dr. Frank N. Furter (Curry) – a self-proclaimed “sweet transvestite from Transsexual, Transylvania” – has created a muscle man called Rocky in his laboratory. The film has a massive worldwide following, with fans often dressing up as the characters and recreating the musical numbers. It boasts the honour of being the longest-running theatrical release in film history, spanning four decades, and is often regarded as one of the best films of all time.

Velvet Buzzsaw stars Academy Award nominated actor Jake Gyllenhaal as a queer snobby art critic who starts to experience supernatural events in relation to a dead artist’s paintings. The film is directed by Dan Gilroy, who previously collaborated with Gyllenhaal and Rene Russo on the critically-acclaimed thriller film, Nightcrawler.

Canadian film What Keeps You Alive follows married couple Jackie (Anderson) and Jules (Allen) who visit a remote cabin in the woods to celebrate their one-year anniversary. There, Jackie discovers that her wife is harbouring a dark and murderous past, and her intentions of a cute queer weekend getaway were not entirely… pure.